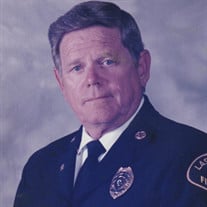 Clell Albert West (86) passed away on May 29, 2021 in Salem, Oregon. He was born on August 23, 1934 in Searcy, Arkansas. A farming family, the Wests moved from Arkansas to Lubbock, Texas during the Dust Bowl prior to settling in Phoenix, Arizona in the late 1940s. Promptly upon arrival in his new Phoenix middle school, Clell met Stella Ruth Webb and they were together until his death. Clell and Ruthie married shortly after high school and had three children, Michael, Sherry, and Ricky. Clell joined the Phoenix Fire Department in 1960 and rose through the ranks to eventually retire as Executive Assistant Chief in 1984, when he joined Las Vegas Fire and Rescue as Chief and served until his retirement in 1996. A strong proponent of education, Chief West put himself through night school at Phoenix College and University of Phoenix while working full-time as a first responder with Phoenix FD, working in construction as a drywaller, and raising a young family. It was at Phoenix College where he began to hone his skills as a writer. His family is blessed to have his typewritten stories and poems recounting his memories and childhood picking cotton in Texas. As Chief of Las Vegas Fire & Rescue, Clell led the department’s growth, implementing sophisticated systems and recruiting experts from around the country to serve on his team. Under his direction, the department attained I.S.O. Class 1 status, the highest possible ranking in fire suppression. To achieve this, in a city known for revelry, heat, neon lights, and scarce water, was a feat previously unattainable. Chief West hired and mentored hundreds of first responders, several of whom have gone on to leadership positions in major cities around the country. Chief West was a nationally recognized expert on emergency response, whose executive communication, planning, and organization skills led him, after retirement, to consulting with the Department of Justice on security from domestic terrorism. As a consultant, Clell contracted with the Nevada Test Site Development Corporation to develop first responder training for the U.S. Department of Energy. As Senior Counterterrorism Operations Specialist with Bechtel Nevada, Clell West was a leader at the Nevada National Security Site, training first responders and agencies at the municipal, county, state, and federal levels for many years. The lives saved and destruction averted by the scope and scale of his emergency management and counterterrorism training's is incalculable. A raconteur, Clell was affectionately named “Boomer” by his grandchildren for the volume of his voice once he got to telling stories. He was dearly loved and will be deeply missed by family, friends, and the fraternity of firefighters across the country. Clell was preceded in death by his parents, Albert L. and Della May West, and by his siblings, Ira, Ola, and Murvyn. He is survived by his wife, Ruthie, his three children, and their families, including ten grandchildren and 13 great grandchildren. A memorial service will be held on June 21, 2021 at 10:00am at Restlawn Funeral Home Chapel in Salem, Oregon. The service will be followed by a graveside firefighter’s ceremony, as well as a reception. Donations in honor of his memory may be made to The American Cancer Society at https://www.cancer.org/involved/donate/memorial-giving.html. Tributes and memories may be shared at https://www.restlawnfh.com/obituaries/Clell-West/.

Clell Albert West (86) passed away on May 29, 2021 in Salem, Oregon. He was born on August 23, 1934 in Searcy, Arkansas. A farming family, the Wests moved from Arkansas to Lubbock, Texas during the Dust Bowl prior to settling in Phoenix, Arizona... View Obituary & Service Information

The family of Clell Albert West created this Life Tributes page to make it easy to share your memories.

Send flowers to the West family.