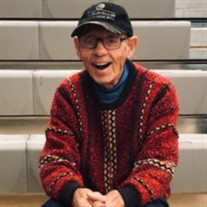 Wayne L. Pruett left his earthly home and entered into the presence of Jesus on Thursday, February 17th, 2022 in Salem OR. He was 89 years old. Wayne is survived by his loving wife of 66 years, Louise (Starr) and their four children: Katrina, Greg, Regina, and Tyson, (Andrea). He is also survived by six grandchildren and one great grandchild. Wayne was preceded in death by his brother and sister and a son, Scott Timothy. Wayne was born June 6, 1932 in West Baden Springs, Indiana to the late John and Mae Pruett. When he was about 14 years old, the family moved by bus to Arizona. Due to parental health issues, he was forced to drop out of school at 16. Along with his older brother Gene, he worked various jobs to support his family. These included delivering ice to the community and working in the restaurant field. He never used his early employment as an excuse however and continued his education via correspondence course and received his GED before attending college. Wayne graduated from Arizona Bible Institute in 1955 where he and Louise met. After a year of dating, they were married on June 11th, 1955. In 1962, Wayne received his bachelor’s degree at Grand Canyon College and then started his teaching career in Ajo, Arizona. During those summers in Ajo, he worked towards his Masters at Arizona State University, which he received in 1967. That same year, the family moved to Medford, OR where Wayne taught middle school science for about 25 years at Hedrick Middle School. He retired from teaching in 1990. When Wayne wasn’t teaching, he was still hard at work. His work ethic from his early years was always present. He painted houses, worked at an ice cream plant, hayed, washed school windows, and even created and sold rock pictures. These were only a few of the several jobs he took on to support his family. Louise’s beloved husband, our devoted Dad and Grandpa, was a hardworking man who lived life based on the foundation principles of Biblical faith. He enjoyed sharing his love of hunting, fishing, raising cattle and gardening with his children and grandchildren. He was an avid reader of Louis L’Amour and a Portland Trailblazer fan. A lifelong learner himself, he remained always at heart an educator; formally as his profession then along with his wife, Louise, as a Sunday School teacher for a generation of 2-3 year old children at First Baptist Church in Medford OR. Whether in an adult classroom, sitting at the table to eat, or during a visit to his vegetable garden; he never missed an opportunity to share his knowledge or ask thought provoking questions.

Wayne L. Pruett left his earthly home and entered into the presence of Jesus on Thursday, February 17th, 2022 in Salem OR. He was 89 years old. Wayne is survived by his loving wife of 66 years, Louise (Starr) and their four children: Katrina,... View Obituary & Service Information

The family of Wayne L. Pruett created this Life Tributes page to make it easy to share your memories.

Wayne L. Pruett left his earthly home and entered into the presence...

Send flowers to the Pruett family.