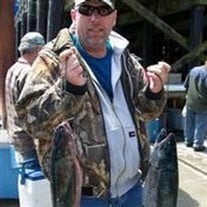 Troy was born on November 11, 1964 in Kansas City, Missouri. His mother remarried and he was adopted by Barney Topper when he was 3 years old. His family moved to Reno, Nevada in 1971 where he grew up. He attended Sierra Vista Grade School and enjoyed playing little league, bowling, and he rode his bicycle all the time. He ran track in High School. His father died in 1980 and Troy had a difficult adjusting. When he was a teenager, he had the opportunity to go to Columbia South America with his grandparents for a month. His grandfather, Joe was a consultant to the American can Company and was in and out of Columbia for 3 years. Since Troy was truly a 1970's teenager, he had the long hair, angel flight pants, and silk shirts. As we look back on it, it was quite a sight. His big event in Columbia was meeting the daughter of the Governor in Barrangia when he was visiting the port city with his grandparents. She took a shine to him and he thought she was really pretty. Arriving home, he made the comment that "he had never been anywhere that the military stood on the street corners with rifles looking for drug runners and he did not want to go back". Troy had a motor cycle accident that left him with plates in his shoulder and rods in his back. He lived at home for about a year and then decided to go to California. Through several events, he came in contact with a ministry from a church. This is when God became real in his life and he accepted the free gift of salvation. He lived in a halfway house in California sponsored by the church ministry team and was very active in the work there. At this time, he began working at Walmart in Anahiem, California. He then moved to Newport, Oregon. In 2003 he transferred to Salem and was active in the setup of the Mission Lakes Walmart. This is where he met Nancy whom he married in Reno, Nevada on August 15, 2007. In May of 2008, Troy left his job at Walmart and started working in the janitorial business. Nancy followed in June of 2008 and they built their own business from 2 accounts, to a current 34 accounts. During the last 3 years, Troy was able to "call in sick" and "have meetings at the office" which were all phrases for FISHING. He and Nancy also took frequent trips to Reno to visit family and Troy was able to spend time with his mother and step father and grandfather. They took trips to San Fransisco, Los Angeles, and just last November, they went to Seattle for a K.C. Chiefs vs. Seahawk football game YEAH! His Beavers didn't do so well. Troy was a hard worker but loved to "mess around" pulling pranks on his employees working in the area. He was a prankster around the house and neighborhood as well. He still fought the demons of his past now and then, but in the last few months had set goals for his life and as he put it, "to get control of my life back". He started attending church again with his family and enjoyed life, he had reached contentment. As Nancy said, "he wasn't perfect, but his love for me, the kids, and the grandkids was evident and our life was good". Troy is survived by his wife Nancy, mother and step-father Rick and Linda Arteaga, grandfather Joe Green, sisters Susi Hodgin, Lisa Arteaga, brother-in-law Noble Hodgin, brothers Joe Arteaga, David Topper, Donnie Arteaga, children Michelle Barrett, Christine Moore, Kayla Topper, Tyler Topper, Kaylee Topper, Joanna Topper, grandchildren Jewel Rogers, Christopher Rogers, Madalyn Rogers, Izaha Topper and many nieces and nephews.

Troy was born on November 11, 1964 in Kansas City, Missouri. His mother remarried and he was adopted by Barney Topper when he was 3 years old. His family moved to Reno, Nevada in 1971 where he grew up. He attended Sierra Vista Grade School and... View Obituary & Service Information

The family of Troy Joseph "TJ" Topper created this Life Tributes page to make it easy to share your memories.