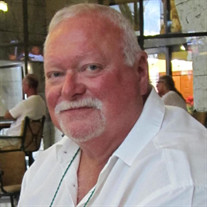 Scott was born February 9, 1953 in Roseburg, Oregon to Jim and June Summers. He joined his sister, Molly and grandparents Joe and Buelah Withers living in Glide, Oregon. Scott graduated from Glide High School where he lettered in track, basketball and football, earning a football scholarship to Linfield College. Scott also turned down an appointment to the Air Force academy when he found out that he couldn’t be a pilot because he didn’t have perfect eyesight. After a year at Linfield with poor grades and the realization he wasn’t going to be a pro-football player, Scott attended Umpqua Community College and graduated from Oregon State University with a degree in Business. In 1976 he followed sister Molly to Salem where he opened A. B. Mower Service. He owned and operated A. B. Mower for 18 years, building a reputation as a great “small engine-ologist”. He might not remember your name but he could tell you what lawn mower you owned and could fix just about anything. In 1993 Scott closed A. B. Mower and went to work at Power Equipment Systems where he was vice-president and operations manager and did training and education with service dealers in five western states. In 2014 he went to work for Schott Parts & Accessories until his retirement in 2019. Scott married Maureen Keough July 12, 1980. They met on what they both agreed was the worst blind date - they had little in common; Scott was the youngest in a small family living in a small town in Southern Oregon. Maureen was the oldest of eight with a large extended family in the Seattle area. Despite their initial misgivings they were married 10 months after that blind date and they shared 41 years of marriage and were blessed with two daughters (Caitlin in 1982 and Courtney in 1985) In 1988 they bought property in West Salem and spent two years building their dream home, doing about 80% of the work themselves with the help of family and friends. Scott was an active member of St. Edward Church serving as a lector, eucharistic minister and sitting on the church council. Besides his faith and family, he had many passions. He loved being on the water, sailing on the Felicity, skippering the MoCaJo and later Her Diamond while towing skiers and tubers around Detroit Lake & Lake Billy Chinook. He also loved to fish whether off a boat, fly fishing from shore or deep-sea fishing on the ocean – he was pretty lucky but when he got skunked, he’d just say “that’s why it’s called fishing and not catching”. He looked forward to hunting season each fall. The hunting crew he was part of would head to Eastern Oregon, set up a huge tent nicknamed the Salem Hilton and spend 10 days tracking elk & occasionally finding one. Scott enjoyed woodworking and used his skills to build furniture and gifts for family and friends. He was particularly proud of the candlesticks he made that are still used at his church. He was an avid gardener, paging through seed catalogs in the winter and planting and tending a large garden each year, sharing surplus with neighbors and co-workers. Scott always enjoyed cooking and especially in retirement would look for and try new recipes to add to his repertoire. He was a Green Bay Packer fanatic and one of the highlights of his life was an opportunity on a business trip to Wisconsin to actually run through the team tunnel and onto Lambeau field! Scott died suddenly and unexpectedly on December 16, 2021. He is survived by his wife, Maureen; daughters, Caitlin & Courtney; sister Molly, “adopted” daughter & fellow Green Bay Packer fan, Renee Wellin and “brother” Jim Harris, as well as a large extended family and circle of friends. Scott might have been a cowboy at heart – he could often be found watching reruns of Bonanza (he was nicknamed “Hoss”) and reading westerns. A cowboy’s work was hard, riding the range and driving cattle across rivers was dangerous and you needed partners you could trust, who were loyal and dependable and stuck with you through thick and thin. The highest compliment a cowboy could give was “Yep, he was good to ride the river with”. Scott’s family, friends and anyone who knew him would definitely say “Yep, he was good to ride the river with.” There will be a Celebration of Life Mass at St. Edward Catholic Church in Keizer on Thursday, January 6th at 1:00 pm. Masks are required. In lieu of flowers the family welcomes donations to St. Edward Catholic Church Community Outreach or Building Fund in his name.

Scott was born February 9, 1953 in Roseburg, Oregon to Jim and June Summers. He joined his sister, Molly and grandparents Joe and Buelah Withers living in Glide, Oregon. Scott graduated from Glide High School where he lettered in track, basketball... View Obituary & Service Information

The family of Scott N. Summers created this Life Tributes page to make it easy to share your memories.

Send flowers to the Summers family.