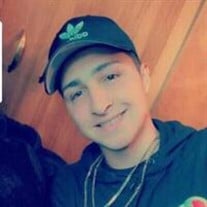 Santiago was born in Portland on Thursday, May 11th 1995, his identical twin, Sergio, was born first. His name was chosen for him in honor of his father. He was baptized on September 17th 1995 at St. Joseph’s Catholic Church as an infant along with his twin. Their godparents are Alfredo and Michelle Cruz. He was always a wildly energetic and happy child. He would always rough-house with his brothers, especially his twin. There would be many competitions to see which twin was better at any given activity. He attended Yoshikai and Grant Elementary School, Waldo Middle School and West Salem High School. As a small boy, he loved playing at the Boys and Girls club, attending swimming lessons, and going to the fair. He enjoyed weights class and being with his friends in school. With his outgoing-funny guy personality, handsome looks, and kind heart, he made friends easily. He did not join any sports because his love and talent for gaming surpassed them all. He held jobs at Pietro’s pizza, a wood mill and working for his parents for their painting company. He was a very hard worker but enjoyed his free time more. Santiago loved being with family and friends and believed we were the most important things in his life. There were many big family camping trips that he enjoyed. He loved swimming in lakes and rivers, shopping for new clothes and shoes, playing with the dogs and giving them weird nicknames, listening to music with a cold beer in his hands, hiking, driving his car, attending parties and dinners, playing video games with his friends, playing with all the little cousins and nephews, and eating out at restaurants. He enjoyed watching movies especially action, comedies, fiction and war movies. He enjoyed books about war and the Hunger Games Series. He thoroughly enjoyed rapping freestyle and loved to challenge people to rap battles. He was very adventurous and loved to challenge people to face their fears and conquer them. Santiago will be immeasurably missed by his mother, Cristy Ilene Bermudez; his step-father, Santiago Bermudez-Raya; his twin, Sergio Luis Rosales; his sisters, Monica Araceli Aguiar and Viviana Isabel Bermudez; his brothers, Alejandro Fernando Perez and Miguel Angel Bermudez; his grandparents, Pedro Hernandez-Herrera and Sharon Lee Hernandez; his birth father, Santiago Rosales-Sierra and family; his nephews and niece; his many uncles, aunts, cousins, and second cousins; as well as many other family members and friends.

Santiago was born in Portland on Thursday, May 11th 1995, his identical twin, Sergio, was born first. His name was chosen for him in honor of his father. He was baptized on September 17th 1995 at St. Joseph&#8217;s Catholic Church as an infant... View Obituary & Service Information

The family of Santiago Salvador Rosales created this Life Tributes page to make it easy to share your memories.

Send flowers to the Rosales family.