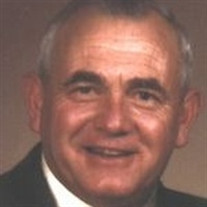 Robert (Bob) Mentzer resided in Salem, Oregon his entire life with the exception of time spent in military service and trade school. Known as a gruff man with a warm and giving heart, Robert was employed as a steam fitter and later established R&M Plumbing as owner and operator with his wife, Beverly. Robert operated the business for 35 years before retiring and charging his son, Kenneth Mentzer with the family business operations. A talented tradesman and gifted designer with wood, metal, and pencil, he remained, until his death, the "go to" guy for repair and creative solving with anything that could be taken apart and put back together again! An avid outdoors man, he enjoyed fishing, crabbing, hunting, camping and airplane model building with his family and friends. A man who could have boasted many accomplishments in life, he claimed only one - family. He left a legacy as strong with his thirteen surviving grandchildren and six great grandchildren as he did with the original "Five K's" (Kathy Cobb, Kay Meeks, Keith Mentzer, Koleen McDowell, and Kenneth Mentzer). Family gatherings were frequent, frenzied, raucous, and joy filled affairs. Robert will be remembered for his sense of humor, gift of laughter, love of the outdoors, creativity, generosity, family presence, and gift of unconditional love. Robert was predeceased by his love and wife of 50 years, Beverly Jean Wikstrom Mentzer. The two were married at First Presbyterian Church in Salem in 1948. Both were graduates of North Salem High School. He is survived by his dear friend and companion, Mavis Dunn, who has shared his love of family, sense of humor, and joy for life; making his life, and those he loved, so much richer for the giving. Services were held Saturday, May 19, 2007, 11 AM at Restlawn Funeral Home followed by military honors and interment at Restlawn Memory Gardens. A celebration of life and reception followed in his honor at the Fraternal Order of the Eagles in Salem. Contributions may be made to the Order of the Eagles or Elks Club of Salem.

Robert (Bob) Mentzer resided in Salem, Oregon his entire life with the exception of time spent in military service and trade school. Known as a gruff man with a warm and giving heart, Robert was employed as a steam fitter and later established... View Obituary & Service Information

The family of Robert W. Mentzer created this Life Tributes page to make it easy to share your memories.

Send flowers to the Mentzer family.