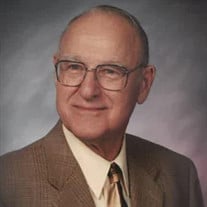 KEIZER - Robert Elwood Graf went to be with his Lord and Savior in Keizer, Oregon on August 21, 2021. He was born on October 20, 1922 on a farm west of Portland, the son of Benjamin and Hulda Graf. Colonel Graf spent his early years on his father's farm where he helped tend livestock and plant and cultivate crops, largely using hand and horse-powered methods. After attending a one room country school, Colonel Graf attended Beaverton High School, graduating in 1940. He then entered Oregon State College (now University) as an engineering student and participated in the Army ROTC program. In early 1943 the Army Reserve Corps and ROTC cadets were activated for the first and only time. Along with classmates, he was sent to Camp Abbot, near Bend, OR for combat engineer training. While there, Colonel Graf was selected to take preparatory training at Amherst College, Massachusetts for entry into the United States Military Academy at West Point. After graduation from West Point in 1948 he served with a surveying unit in the Philippine Islands from 1949 - 52. Upon return to the United States he obtained his master’s degree in engineering at Caltech, which enabled him to become a registered professional engineer in the States of New York and Oregon. While studying in Pasadena he met Mary Evelyn Parke from Salem, Oregon. They married in 1953 and began 61 happy years of life together. Beyond his surveying tour in the Philippines, Colonel Graf's military career included supervising military construction in Labrador; teaching ROTC students at the Polytechnic Institute of Brooklyn; command of an Engineer Company in Hawaii; graduation from the Army Command and General Staff school, member of the Army General Staff at the Pentagon; working in Taiwan as a member of the Military Assistance and Advisory Group; and a tour on the United Nations Command military staff in Seoul, Korea. In 1968 Colonel Graf retired from the Army and settled in Salem, Oregon. Shortly thereafter he began 20 years of service with the Oregon Department of Revenue. From the time of his return to Salem, Colonel Graf devoted extensive service for his Lord as an active member of Salem First Baptist Church. For many years he served on its Board of Deacons and various sub-committees. He also maintained the confidential personal records of all contributions to the Church for many years. Colonel Graf enjoyed gardening about the family home in South Salem and especially prized the many varieties of dahlias he raised and cared for. He lovingly supported his wife Mary Evelyn in her doll and bear collecting hobbies and club activities. In January 2005 Robert and Mary Evelyn moved from their south Salem home to Avamere Court in Keizer where he resided until his death. While at Avamere he remained engaged in group activities, bible studies, and service on the Resident Council. He greatly enjoyed the fellowship of other residents and the care and support of the excellent staff at Avamere Court. He is survived by his son, Robert E Graf Jr (wife Nancy), of Rock Island, Illinois, granddaughter Melissa (husband Mark Rickard) in Venice California, and grandson Matthew, Rock Island Illinois. He is also survived by his sister, Marilyn Bixby and brother, Douglas, of Portland. He also leaves many beloved nieces, nephews, and dear friends. Memorial services will be held at 10 a.m. (visitation 9:30) on Monday August 30, at Salem First Baptist Church. Memorials may be given to the church or to the Salem Union Gospel Mission. Colonel Graf will be laid to rest next to his wife and near his father, grandfather and great-grandfather in the Union Cemetery of Cedar Mill. Arrangements are by Restlawn Funeral Home of Salem.

KEIZER - Robert Elwood Graf went to be with his Lord and Savior in Keizer, Oregon on August 21, 2021. He was born on October 20, 1922 on a farm west of Portland, the son of Benjamin and Hulda Graf. Colonel Graf spent his early years on his... View Obituary & Service Information

The family of Robert Graf created this Life Tributes page to make it easy to share your memories.

KEIZER - Robert Elwood Graf went to be with his Lord and Savior...

Send flowers to the Graf family.