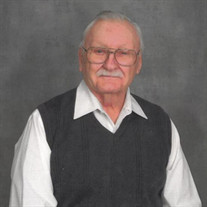 Richard Owen Gettis was born to Gordon and Viola Gettis on 7 November 1936. Dick’s family roots began in his birthplace of Forest City, Iowa, and eventually the Gettis family settled in Keizer, Oregon when Dick was a young boy. Dick passed away on 23 October, 2021, in his hometown of Keizer. Dick lost his beloved wife of 62 years, Jackie, just three months ago. While the family is heartbroken over this loss, Dick was profoundly heartbroken and made the journey to join his life’s love. Dick retired as a Senior Chief Cryptologist from the United States Navy in 1974, and was a transit driver for the City of Salem for 25 years. In retirement, Dick was passionate about many things including music, reading, NASCAR, and birding. Mostly, however, he was a genealogical master, having documented the Gettis and extended family lineage going back several hundred years. Dick is survived by his children, Carol Gettis Miller and husband Mike Miller, Stuart Gettis and wife Jani Gettis, and Teri Gettis Lemman; brother Bob Gettis and sister-in-law Kelley Gettis, brother John Gettis and sister-in-law Marilyn Gettis; grandchildren Melissa Austin, Pamela Austin, Jackie Pasquarella, Rich Gettis, Michael Miller, Emily Barker and MaryAnn Olson and their spouses Alec, Brittany, Tim and Brandon; great grandchildren Chase, Eemia, Jackson, Amelia, Etta, Nora, Aviana and Lily. A reception, service and burial are Friday, October 29, at Restlawn Memory Gardens, 201 Oak Grove Rd. N.W., Salem, OR 97304. The reception begins at 1 p.m., with a remembrance service at 2 p.m., followed by a graveside burial with military honors at 2:30 p.m.Donations may be made to the Salem Audubon Society, P.O. Box 2084, Salem, OR 97308.

The family of Richard "Dick" Gettis created this Life Tributes page to make it easy to share your memories.

Richard Owen Gettis was born to Gordon and Viola Gettis on 7...

Send flowers to the Gettis family.