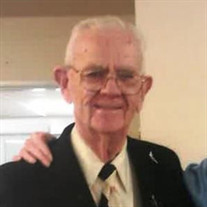 SALEM – Raymond Tipton, 96, passed away peacefully with family present on May 1st in Salem, Oregon. The youngest of 5 boys, Ray was born in Tipton, Oklahoma on October 8, 1925, to Andrew and Nora Tipton. After attending Rosehill School in Fredericksburg, Oklahoma, Ray moved to Oregon with his parents and brother Jack and in 1943 enlisted in the Navy at age 17. Ray served on the USS Reno in the South Pacific during World War II and left the Navy in 1946. Ray worked fulltime at the Oregon National Guard in Salem from 1948 to 1965, staying in the Army Reserve until 1985 when he retired as a Lt. Colonel. In 1966, Ray went to work at the Oregon State Hospital as Director of Support Services and later as Assistant to the Physical Plant Superintendent and retired in 1987. Ray met his beloved wife, Claudia, of 67 years on a trip to Reno in 1943 with a shipmate. Ray and Claudia were married in March of 1945. They returned to Salem and had 3 children, Jeanette, Denise, and Michael between 1946 and 1953. Ray was known as a man of strong faith. He and Claudia were baptized together in November of 1951 and became members of the Central Church of Christ in Salem. They went on to attend the Market Street Church of Christ where Ray was a deacon and then later the South Salem Church of Christ where he was one of the original members and later became an elder. Besides his love of church and family, Ray loved to hunt and went on many deer hunting trips with friends. Later in life, in retirement, he became a knife collector and bought and sold knives from his business, “Ray Tipton’s Knives” at Engelberg’s Antiks in Salem. Ray is survived by his 2 daughters, Denise Itoh of Keizer and Jeanette Martin of Portland, his 5 grandchildren Lynette Martin, Melissa and Toshimi Itoh, Alex Biddle, and Tiffany Carson and 8 great grandchildren Kayla, Elizabeth, Ashlyn, Logan, Harrison, Zane, Kaida and Jayden. Ray was preceded in death by his wife, Claudia, his son Michael, his parents Andrew and Nora, and his brothers Terry, Dave, Jack and Clarence. Family and friends are invited to celebrate Ray’s life at the Market Street Church of Christ at 3745 Market St NE in Salem on Saturday, May 14, 2022. A viewing will be held at the church between 11 am and 12 noon. The funeral service will take place at 12 noon. Immediately after the service, a celebration of life potluck will be held at the community center at Sundial Mobile Home Park at 2310 Lancaster Dr SE. In lieu of flowers, a contribution may be made to Tipton Children’s Home, P.O. Box 370, Tipton, Oklahoma or at www.tiptonchildrenshome.com.

SALEM &#8211; Raymond Tipton, 96, passed away peacefully with family present on May 1st in Salem, Oregon. The youngest of 5 boys, Ray was born in Tipton, Oklahoma on October 8, 1925, to Andrew and Nora Tipton. After attending Rosehill School... View Obituary & Service Information

The family of Raymond Tipton created this Life Tributes page to make it easy to share your memories.

Send flowers to the Tipton family.