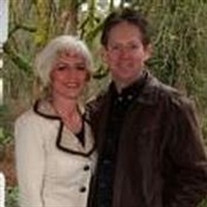 Randy Burningham November 1, 1951 - July 5, 2011 Brenda Burningham October 9, 1956 - July 5, 2011 SALEM - Randy rushed into the world in a whirlwind on November 1, 1951 in Provo, UT and was greeted by his parents, Ray Lester and Margie. A few years later, Brenda followed, October 9, 1956 in Cardston, Alberta to Ron and Joyce Holland. Randy spent his childhood terrorizing the mountains and fields of Utah and getting into as much mischief as he and his friends could find; never being far from a horse, a dune-buggy, or some sort of throttle. Like his father, Randy's love of motorcycles ran deep and began at an early age, officially beginning when he bought his first mini-bike at age 14 and his first "Hog" at 15. In 1971, at the age of 19, Randy accepted a call to serve the people of Australia as a missionary for the LDS church. Returning two years later, Randy spent the rest of his life sharing the life lessons he learned and the stories of his experiences. Meanwhile, Brenda was enjoying life with her family and spending much of her time, waterskiing, even living on a lake for a few years. A true Canadian to the bone, Brenda enjoyed ice-skating, snow skiing, basketball, volleyball and track and field. She often enjoyed puzzles and games, excelled academically and loved anything that stretched her mindan impeccable student from the beginning. In spite of being raised in different countries, Randy and Brenda were destined to start their life together as students at Brigham Young University in Provo, Utah. Friends that witnessed the event will swear that Randy first noticed Brenda's bicycle as she passed by the men as they sat in the student quad. But when Randy did see her, he knew he had to meet her. They metwhen he literally picked her up off her bike seat! Married for Time and all Eternity on August 12, 1976, Randy and Brenda began their lives together in the LDS Salt Lake Temple, in Utah. Following Randy's graduation, the couple moved to Texas, where Randy attended the Baylor University School of Dentistry. While in Texas, Randy and Brenda welcomed their first two children, Ryan and Brandi, into the world. Following graduation in 1981, the small family started their own dental practice in Salem, Oregon. In the next few years, the family grew, as Mikaela, Dustin, and Aubrey completed the family. Randy and Brenda devoted themselves to their family in every way, attending musical performances, athletic events, church functions, scouting activities, and absolutely anything else that could be crammed into a daily schedule. Friends and family all remember fondly the countless hours spent on the lake with Randy and Brenda, the picnic lunches, the campfires and the snowmobiling trips. As a couple, Randy and Brenda enjoyed traveling to be with their children and 4 grandchildren, service to their church and community and dancing. In addition, they treasured their motorcycle rides often traveling with friends and family all across the western US. Tragically, Randy and Brenda journeyed out of this world, together, on July 5, 2011 outside Libby, Montana. Randy and Brenda are survived by their 5 children and their spouses, 4 grandchildren, Randy's mother, Margie and his 4 siblings. Brenda is survived by her father, Ron, and her 4 siblings. Memorial services will be held on Wednesday, July 13 at 11:00AM at the West Salem Stake Center (3154 Eola Dr NW, Salem, Oregon 97304). The memorial service will be preceded by a public viewing the night before, Tuesday, July 12 between 6:00 and 8:30PM at the Restlawn Funeral Home (201 Oak Grove Rd NW, Salem, Oregon). The family requests that in lieu of flowers, donations be sent to the LDS Perpetual Education Fund (801-240-0337). For more information on this fund, visit http://pef.lds.org.

The family of Randy & Brenda Burningham created this Life Tributes page to make it easy to share your memories.