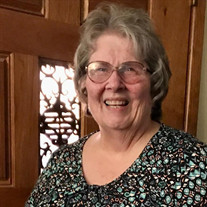 Patricia Kay Willems was the firstborn child of Waldo and Grace Willems. She was born in Salem, Oregon on December 22, 1940, and continued living in Salem until the age of 12, when the family moved to Dallas, Oregon. She was the proud older sibling of Ron, Barb, Joe, Evy and Jack. Pat accepted Christ into her heart at a young age and was baptized at Kingwood Bible Church in Salem. After Pat graduated from Dallas High School, she went to Modern Beauty College in Salem to get training as a licensed beautician. Her practice on sister Barb wasn’t always successful, but it got Barb some interesting looks. Pat married LeRoy Koop in July of 1961. Their son Michael Brian was born September 21, 1964. And son Thomas Jay arrived May 10, 1966. After just a few years working in Dallas, Pat opened her own shop she called The Beauty Koop. She was a successful professional who was able to stay at home with her boys. When LeRoy built her shop in the place of their former carport, there was a corner set up as a play area for Mike & Tom. After Pat and LeRoy divorced, she started attending activities with a group called Parents Without Partners. That’s where she met Everett Nicholson. Everett is the father of Teresa, Tammy, Tony and Tracy. So when they married in June 1974, they combined their six children, bringing Pat into the same status as her mom. Although Teresa got married only a few months after Pat & Everett, Pat raised the remaining five children with Everett, who ranged in age from 11 to 4 years old. Pat was truly Mom to her “Bonus Children.” Along with the role of mother, Pat continued her work with fixing hair for friends and family, as well as for departed people at various funeral homes. Being a member of Family Life on Wallace Road in West Salem, Pat volunteered folding bulletins and helping the bookkeeper with deposits of weekly offerings. She continued this work up until her most recent illness. Patricia Kay Willems Nicholson passed away Saturday, February 12, 2022 at the home of her bonus-daughter Teresa in Salem, Oregon, never regaining consciousness from a massive stroke February 3. Pat is survived by her husband Everett, son Tom, bonus-daughter Teresa (and her husband Craig), bonus-son Tony (and his wife Sandy), bonus-son Tracy (and his wife Michelle), brothers Ron (and his wife Connie), Joe (and his wife Judy), sisters Barb (and her husband John) and Evy (and her husband Kurt). She also leaves behind 21 grandchildren, 25 great-grandchildren and 4 great-great grandchildren. Along with her parents, Pat was preceded in death by her brother Jack, bonus-daughter Tammy and son Mike.

Patricia Kay Willems was the firstborn child of Waldo and Grace Willems. She was born in Salem, Oregon on December 22, 1940, and continued living in Salem until the age of 12, when the family moved to Dallas, Oregon. She was the proud older... View Obituary & Service Information

The family of Patricia K. Nicholson created this Life Tributes page to make it easy to share your memories.

Patricia Kay Willems was the firstborn child of Waldo and Grace...

Send flowers to the Nicholson family.