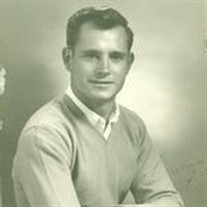 Orville Porter Siler was born May 6, 1927 in Weston, Missouri. He passed away April 27, 2009 in Salem, Oregon after a valiant struggle with Alzheimer's Disease. Porter, as he wished to be called, was the third of six children born to Orville A. and Jessie L. Siler. When very young, he moved with the family to Southern California. By 1933, the family had relocated to Grants Pass, Oregon where he resided until 1977. Porter enlisted in the U.S. Navy during World War II, serving aboard the aircraft carrier U.S.S. Saratoga. After his discharge, he attended Perry Institute in Yakima, Washington. After returning to Grants Pass, he married his wife, Carol, in 1950. There they raised their three children: Kay, Debbie and Craig. While residing in Grants Pass, Porter was employed for 18 years by Pacific Northwest Bell Telephone Company where he worked as a cable repair specialist. During the late 1960's he and Carol began construction of what would become Country Estates Mobile Home Park. The construction of the park then led to their establishment of County Estates Mobile Home Sales with the main office located in SW Grants Pass and branch offices in Medford and Redmond, Oregon. He retired from the day-to-day management of the business in 1977. Thus began a twenty-five year adventure of acquiring, renovating and developing farm, residential and commercial properties throughout Washington, Idaho and Oregon. Along the way he found time to enjoy hunting, fishing, and traveling the world. In 1988, he and Carol moved to Salem. In 1993, they constructed their dream home on a 40 acre parcel in West Salem where Porter spent the next 13 years working and enjoying the land. Porter was a dedicated husband and father. He was a self-made man who had the vision and the willpower to live the American dream. His was a life well and fully lived. He is survived by his wife, Carol; daughters, Kay Siler (Salem), Debbie Hammond (South Jordan, Utah); and son, Craig Siler (Salem). Also surviving are 4 grandchildren, 3 great-grandchildren; a brother, Gerald (Columbus, Ga.); a sister, Carol Frazier (Sierra Vista, Ariz.); and numerous nieces and nephews. He is preceded in death by his brothers, Andrew and Fred; and his sister, June. Funeral services will be held at 10 a.m. on Saturday, May 2 at Restlawn Funeral Home in Salem. Military honors and interment will follow at Spring Valley Cemetery on Zena Road in West Salem. The family wishes to thank all the staff at Orchard Heights Assisted Living and Signature Hospice for their loving care and support during his struggle with Alzheimer's Disease. Charitable donations in his honor may be given to Alzheimer's Disease Research.

Orville Porter Siler was born May 6, 1927 in Weston, Missouri. He passed away April 27, 2009 in Salem, Oregon after a valiant struggle with Alzheimer's Disease. Porter, as he wished to be called, was the third of six children born to Orville... View Obituary & Service Information

The family of Orville Porter Siler created this Life Tributes page to make it easy to share your memories.

Send flowers to the Siler family.