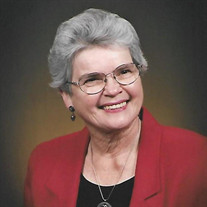 Molly Eloise Delepine Moeck Miller was born on June 13th 1932 in Portland, Oregon. Molly was second youngest of seven children born to Sheridan and Ruth (Fitch) Delepine, and she grew up in Hood River, Oregon. Molly’s mother died when she was a child and she and her younger brother went to live on a farm with her Aunt Ruth and Uncle Wilbur Anderson and their two children Lodece and Wilbur Jr. Molly married John Morris (Morrie) Moeck in 1950, they lived in Salem, Oregon where they raised their five children. She worked for a family friend managing several rental properties, and later acquired her Real Estate and Brokers license. She enjoyed a few years of retirement until the death of her first husband Morrie in 1997. She married Donald Glen Miller in 2002 and moved to Parkdale, Oregon where together they lived on his family farm, traveled to Europe, and enjoyed the majestic views of Mount Hood. Upon the passing of Donald Miller in 2006 she returned to her home in Salem. Molly loved music throughout her life, playing the violin, viola, piano, performing in the Salem Symphony for a time and singing in the church choir. She was an avid gardener, and was involved with a book club, folk dancing and traveling. She loved getting together with family and friends, and was loved by everyone who knew her. Molly passed away peacefully at Capitol Manor the morning of October 8, 2021 at the age of 89. The caregivers at Capitol Manor provided her care with dignity and love during the final stages of her life. She was preceded in death by her grandparents, parents, aunts and uncles, many other relatives including her sisters Betty, Barbara and Jean, brothers David and Kay, husbands Morrie and Don, and two grandsons Sammy and Aaron. Molly is survived by her brother John, children Steven Moeck, Daniel Moeck, Marty (Brent) Nielsen, Wendy (Tony) Stearns, and Laurie (Kelly) Kolb, as well as nieces, nephews and 17 grandchildren and 18 great-grandchildren. The family has plans for a celebration of life in the future as it becomes safer for family and friends to travel and gather together.

The family of Molly Miller created this Life Tributes page to make it easy to share your memories.

Send flowers to the Miller family.