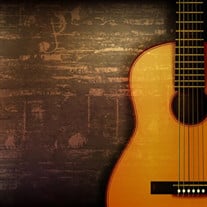 Melford (Mel) L. Evenhus Born August 11, 1936 to Casper (Casey) and Olaug (Holl) Evenhus in Maddock, North Dakota. Met and married wife Phyllis in Wenatchee, WA in 1963. Moved to Seattle in 1964 and to Salem, OR in 1967. He died on April 30, 2022. Brothers Gordon of Aloha, OR, Donald (Alice) of East Wenatchee, WA, and David (Nancy) of Woodburn, OR. Sisters Gloria Ferris of Salem, Grace (Don) Cote of Nordland, WA, and Dallas Burks of Salem, OR. Step-Children, Diana Trimble, Donna Evenhus, and Michael Evenhus of Salem. 4 step grandchildren and 1 step-great-grandson whom he adored. Marvelous country guitar player, played with many bands during his long career. He could make that guitar “sing”. Loved playing "twin” guitars, especially with long-time friend Jack B. He held many day-jobs over the years from driving delivery trucks, hauling turkeys, working on paving crews and rock crushers, transit bus driver, and school teacher. A man of all trades! Preceded in death by father, mother and brothers Harold, Gordon and sister Gloria.. Love you all!

The family of Melford Evenhus created this Life Tributes page to make it easy to share your memories.

Send flowers to the Evenhus family.