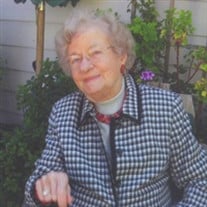 Mary Todd Pfeifer was born on December 5, 1920 to William Booth Todd and Edith Hawkins Burton in Chester, PA on of five children that included four brothers: William Burton Todd, Richard Burton Todd, Edward Burton Todd and David Burton Todd, all of whom predeceased Mary. Mary grew up in both Maine and Pennsylvania. She attended the University of Alabama in Tuscaloosa from 1938-1942 where she majored in art and minored in education and Spanish. Her career began as a draftsman for DuPont. While at the University of Alabama, Mary met Harry J. Pfeifer and they were married in 1943. After W W II, they moved to Schenectady, New York where Mary continued raising her daughter and son and began teaching art. In 1955, the family moved to Saratoga, California where Mary took post-graduate course and earned her teaching credentials for kindergarten through junior college at San Jose State College. Her career in California include teaching art in many settings, including various school districts, a drug rehabilitation center , to unwed mothers and as an art therapist at a center for autistic children. In 1982, when Harry retired, they relocated to Shelter Bay, Washington. Harry kept busy sailing while Mary continued her art, played bridge and enjoyed many visits from family and friends. In 2004, Harry and Mary made their last move to Hillside in McMinnville, Oregon. Harry passed away in 2010. Mary remained active, both traveling and painting, primarily landscapes and portraits. In December of 2011, Mary had a one-woman show at the McMinnville Senior Center where many of her paintings were sold to benefit the center. Mary was a painter for over 65 years and was also a world traveler. She was active right up to the end when she passed away on January 17, 2013, at Hillside. Her son-in-law called her the "Energizer Bunny". She is survived by her two children, Margaret Ramsay (Ray) and J. Todd Pfeifer (Markay); two grandchildren, David T. Ramsay (Gita) and James J. Ramsay (Kristle); three great-grandchildren, Mikhaela, Joshua and soon-to-be Genelle Ramsay, and numerous nieces and nephews. In lieu of flowers or other remembrances, please consider honoring Mary's memory with a donation to the Hillside Foundation, the McMinnville Senior Center, or the Gallery Theatre in McMinnville. A celebration of Mary's Life will be held on Sunday, February 24that the Manor Activity Center, 900 W. Hill Road, McMinnville, from 2 to 4 pm.

The family of Mary Todd Pfeifer created this Life Tributes page to make it easy to share your memories.

Send flowers to the Pfeifer family.