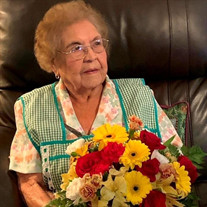 Maria de Jesus Ortega de Alvarado, age 96, passed away peacefully on the early morning hours of September 16, 2021 due to long time health complications. She was born December 24,1924 in Mexico. At the age of 21 the family consisting of her father Jose and her mother Juanita along with her five siblings (Lupe, Marina, Cuca, Antonio, Francisco) moved to Harlingen, Texas. There she worked in a clothing store where she later met and married her husband, Bernardo Alvarado. While living in Harlingen they had four of five children there (Daniel, Concha, Elva and Leticia) They later moved to Brownsville, Texas where Maria worked at a shrimp factory in Padre Island. Later due to financial complications they left Texas and moved to Sunnyside, Washington where she and her husband labored in the field cutting asparagus. They followed the crops for four years from Washington to Oregon to California and back to Washington before finally settling in Independence, Oregon where they eventually bought a home. She and her husband had one more child (Ricardo) Her main source of employment until she retired was cannery work where she worked for Del Monte and later Truitt Brother’s in Salem, Oregon. Maria was a loving person to all who knew her and made friends easily. She enjoyed cooking and making tamales during the holiday season. She made flour tortillas for her grandchildren and delighted in making concha’s (Mexican bread). Maria had a fondness for Mexican music and exhibited great dancing skills going to dances whenever possible. As a devoted God-fearing woman Maria attended mass every Sunday and was a member of St. Patrick’s Catholic Parrish and the Knights of Columbus in Independence. As a church member she participated in many of the events that took place and gave of her time willingly without needing to be asked. She was a woman of strong faith who read the bible and prayed every night before going to bed. Maria is survived by her husband Bernardo and their five children Daniel Alvarado, Concha Rincon and her husband Luis, Elva Oliveros and her husband Roberto, Leticia Aguilera and her husband Miguel and Ricardo Alvarado and his wife Sara. Grand children are as follows: Angelica García, Adrián Oliveros, Alicia Karstetter, Cecilia Cazares, Verónica Oliveros, David Rincon, Louie Rincon, Jimmy Rincon, Esteban Alvarado, Damián Alvarado, Marcos Gastelum, Ricky Alvarado, Nicol Alvarado, Brook Alvarado We invite you to come and join us celebrate Maria’s life. Viewing will take place on Thursday, September 23 from 12:00p.m. to 3:00p.m. Funeral Mass will take place on Friday, September 24 from 12:00p.m. to 1:00p.m., at St. Patrick Parrish in Independence followed by interment at 1:30p.m., at Restlawn Funeral Home 201 Oak Grove Rd., NW., Salem, Oregon 97304

Maria de Jesus Ortega de Alvarado, age 96, passed away peacefully on the early morning hours of September 16, 2021 due to long time health complications. She was born December 24,1924 in Mexico. At the age of 21 the family consisting of her... View Obituary & Service Information

The family of Maria Alvarado created this Life Tributes page to make it easy to share your memories.

Send flowers to the Alvarado family.