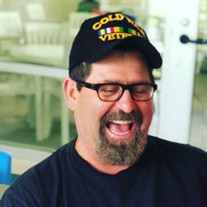 Les Eddy Salem - Leslie (SPIKE) Alan Eddy 5/29/56-7/4/18 Born to Ernest Eddy and Mary Jo Mock in San Rafael, Ca. To give, in brief, what this man accomplished in life will never do him justice. He was born into a world of little means and few advantages. However, he considered each hurt, each loss, and every hunger pain a blessing. He loved his siblings and their feeble beginnings only made their bond stronger. He was married to Christina Louise Eddy for over 30 years until her passing. They still danced everyday and now he will join her on the most famous of dance floor of all. (She may have been saving his place in line) like they did in Disneyland. Les was a jack of all trades and wore several hats throughout the years. Served in the army and spent time guarding the Berlin Wall during the Vietnam era. He opened Advanced Hearing Services in 1996, after working in the Hearing industry for several years prior. He devoted his life to helping people hear. He was active in the community in several organizations and clubs. Gave generously. He served as youth pastor for over ten years. Was a hardcore Harley man and loved traveling on the open road! Traveling the world, both stateside and abroad to help the less fortunate, to visit and spend time with family, and for a lot of fun! Les filled his life with love for others and they in return fulfilled his world. Love, Life and laughter were no mere words to him.... it was his practice. His obedience to God, loyalty to his family, serving spirit, his joyful attitude and desire for fellowshipping, that lead him to close connections with his family, friends, and neighbors. This guys big fish stories are true! He went on all the boats with all locals and caught Sail fish, swam with dolphins and sting rays, visited castles and pyramids, jumped off airplanes and even flew them. He visited 5 continents and even vacationed with his dad in Mexico...twice. He did the right thing because it was the right thing to do. He loved his family with everything he had. But above all else......He lived to ride his Harley and got to leave this Earth doing the thing he loved the most! • The survivors are.... • ANYONE AND EVERYONE HE KNEW AS HE GAVE SO MANY HIS ALL! • His Momma Jo • His siblings (Patty, Michael, Paula, Shirley, and Tammy) • His kids (Jason, Jeremy, Stephanie, Dan, and Kevin) • His amazing grandkids and great grandkids. As Spike would say.....DO THE NEXT RIGHT THING!!!

Les Eddy Salem - Leslie (SPIKE) Alan Eddy 5/29/56-7/4/18 Born to Ernest Eddy and Mary Jo Mock in San Rafael, Ca. To give, in brief, what this man accomplished in life will never do him justice. He was born into a world of little means and few... View Obituary & Service Information

The family of Les Eddy created this Life Tributes page to make it easy to share your memories.

Send flowers to the Eddy family.