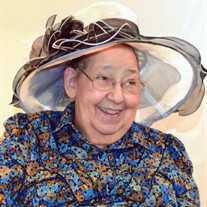 To view the service live go to: https://www.viewlogies.net/restlawn/Gg1k4o50W?pin=197055 & use pin # 197055 Lea Berry was born on a dairy farm in Delight Valley, near Cottage Grove, OR in June of 1934 to Lawrence and Florence Hankins. She was the youngest of ten children. She had 5 brothers and 4 sisters. When Lea was 18 months old, her family sold the dairy farm and moved to Bonanza, OR to operate a large ranch in January of 1936. Lea loved spending time riding horses on the ranch. Lea graduated from Bonanza High School in 1952 and briefly attended Southern Oregon College in Ashland, OR. In May of 1953 she started working for Specialized Service in Klamath Falls, where she met her co-worker, Melvin Berry, who became the love of her life. Lea and Mel married on November 6th 1954. They had two daughters, Janis Berry (Flagg) born February of 1957 and Joan Berry (Lulow) born April of 1958. They lived in Klamath Falls until September of 1964, when they decided to move to Salem, OR. Lea was a child care provider during the early years of their marriage. In November of 1973 Lea began working as a dental receptionist for three dentists, one of whom was Dr. Wendell McLin, Kathy McLin's brother. Lea and Mel had been close friends with the McLin family in Klamath Falls. Lea retired in March of 1982 to spend time with Mel, who also retired then. They enjoyed traveling to visit family and friends. Lea enjoyed cooking, sewing, reading and creating Counted Cross Stitch pictures for her family and friends. Lea and Mel were faithful followers of a home based Christian fellowship and held a Sunday morning fellowship meeting in their home in Salem for many years, until Lea's health declined in September of 2005, when Lea suffered a stroke. Lea and Mel then moved to Redwood Heights Assisted Living in Salem in November of 2005. Mel passed away August 30th, 2006. Lea remained living at Redwood Heights. Lea passed away on January 10th, 2022 She is survived by her daughters, Janis Flagg (husband Dennis)of Washington and Joan Lulow (husband George) of Oregon; two grandsons, Kenneth Lulow (wife Katherine) of Tennessee and Ronald Lulow,(wife Jessica) of Oregon and 9 great grandchildren.

To view the service live go to: https://www.viewlogies.net/restlawn/Gg1k4o50W?pin=197055 & use pin # 197055 Lea Berry was born on a dairy farm in Delight Valley, near Cottage Grove, OR in June of 1934 to Lawrence and Florence Hankins. She was... View Obituary & Service Information

The family of Lea Berry created this Life Tributes page to make it easy to share your memories.

Send flowers to the Berry family.