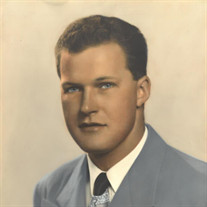 Lauren Monroe Walker “Demps” was born in Vancouver, WA to Monroe L. and Alice G. (Martel) Walker on February 5, 1930. He was the third of four children. He passed away peacefully at home in Monmouth, OR on November, 24, 2021 at the age of 91. During his childhood he had dimples and so “Demps” became his nickname as he had his own unique way of spelling it. He grew up in the logging camps of Oregon and Washington. As a teenager he went to work in the tall timber of Oregon as a lumberjack. Logging was in his DNA and he was part of a family logging crew that included his father, brother, and uncle. On a blind date Demps met Clara B. McEwen of Stayton, OR, his future wife and partner of 71 years. In 1950 they married and together they would raise a family of seven children. After moving to Lyons, OR he built them a house and later a second one by hand. Early in their marriage they had more visits from neighbors than usual because of owning the first TV set in town. Later the family moved to a farm near Redmond, OR. Lauren and Clara worked the farm by day and Lauren also worked at a sawmill by night. Returning to Lyons and the woods, he survived an accident involving a massive log rolling over him and was saved by being pushed into boggy soil. Following that experience, Lauren chose a less risky profession and together with Clara ran a back-hoe/septic service in Lyons for 18 years. In the early 1980’s, the business was sold and both he and his wife realized their dream of living on a beautiful farm in Monmouth, OR. Always the entrepreneur he leased his land for growing grass seed and cleared logs to sell for firewood. Lauren was a faithful believer and long-term member of Lyons Santiam Chapel Assembly of God and Independence Family Church AG. Survivors include his wife and six of his seven children. He was preceded in death by his oldest son Kim M., and siblings Marion, Walter “Bud”, and Valerie. Survivors include his daughter Renee M. Clarambeau, his sons Ken L. (spouse Jan), Steven R. (spouse Jamie), Mark L. (spouse Kimberly), Matthew D., Tim W. (spouse Gerry), his daughter-in-law Brenda as well as 13 grandchildren, 16 great-grandchildren, and one great-great grandchild. Lauren will be remembered as a very thrifty, hard-working, soft-spoken man who loved his family. He enjoyed camping, fishing, and hunting. The Monmouth farm was Lauren’s favorite place on earth. In his later years he could be found sitting on the front porch enjoying his view of the land. A family reunion to remember him will be held at a later date.

The family of Lauren Monroe Walker created this Life Tributes page to make it easy to share your memories.

Send flowers to the Walker family.