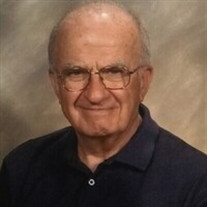 On February 14, 2021, God took Larry home to be with Him for eternity.  Throughout his life, Larry loved his family.  He was a devoted husband and father and a caring friend.  He was also a man of faith, believing in Jesus Christ as his Lord and Savior.  Larry invested much of his time in helping and serving others in any way he could.  Larry was born July 20, 1935, to Lysle and Edna Buckner in Parker, South Dakota.  He graduated from Salem High School and received his Bachelor’s degree from Willamette University.  Larry joined the U.S. Air Force and served as an officer in the 62nd Bombardment Squadron for nearly 12 years.  While serving, Larry married his wife, Bonnie, in Oscoda, Michigan, and welcomed his daughter, Marci.  Larry and Bonnie were actively involved in Oscoda Baptist Church while he was stationed in Michigan. After serving in the U.S. Air Force, Larry and his family returned to the Willamette Valley, settling initially in Albany, Oregon.  Larry began working for the Children’s Farm Home and then Duraflake, a particle board mill. He welcomed his son, Jim, not long after.  Larry and his family joined North Albany Baptist Church and were active members for more than 10 years. In 1981, the family relocated to Salem, Oregon.  After 31 years at Duraflake (Weyerhaeuser), Larry retired in 2004, having worked in different roles throughout his career.  During this time and throughout retirement, Larry and Bonnie became active members of Salem First Baptist Church, where he enjoyed Bible studies, helping with Awana kids’ programs, praying with and for others, and serving as an usher. He is survived by his wife, Bonnie Buckner; daughter, Marci (Robert) Johnson of Salem, Oregon; son, Jim (Brenda) Buckner of Newberg, Oregon, and 3 grandchildren. He was preceded in death by his parents and grandsons Jeremiah Johnson and Cameron Johnson. Larry’s care and concern for others punctuated his life.  He maintained a humility and compassion that was evident to all who knew him.  He is much loved and showed great love for us, his family.  We will miss him tremendously. A Celebration of Life will be held at Salem First Baptist Church on Saturday, February 27 at 2:00pm.   In lieu of flowers, donations can be made to the Union Gospel Mission or Salem Leadership Foundation, both causes important to Larry.

On February 14, 2021, God took Larry home to be with Him for eternity.  Throughout his life, Larry loved his family.  He was a devoted husband and father and a caring friend.  He was also a man of faith, believing in Jesus Christ as his Lord... View Obituary & Service Information

The family of Larry J. Buckner created this Life Tributes page to make it easy to share your memories.

Send flowers to the Buckner family.