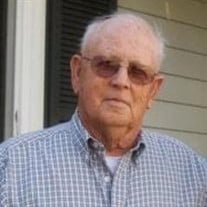 Ken was born at home in Lebanon, Oregon 96 years ago, to Iris Fitzwater Christ and Ernest Christ. He joined the US Navy in 1942, served during WWII in Puerto Rico, and was discharged in 1946. He was a logger when he met and married Florence Schrouder in 1950. When they decided to build a house on the Schrouder farm, Ken changed to employment at a local plywood plant so he could work swing shift, and assist with the building of their new home during the day. They moved into the shell of the new house with their two little boys, Marty and Marlin. Four more children would soon follow, and he worked to expand and improve their home quite often. He continued at Western Veneer until, after working as a temp at the post office during Christmas season as a second job, he decided the post office was a better option for him and his growing family. He continued there for 26 years, until his retirement in 1982. While working at the post office, he also worked second jobs at Brewster Store and Bud's Shell Station. In the early years, he would work as a logger during post office vacations. Ken had many hobbies. He loved to deer and elk hunt, golf, hunt for mushrooms, and fish in all seasons. He especially enjoyed his ocean fishing trips, and elk hunting each fall. He and his friends spent many hours repairing and maintaining St. Martin's Episcopal church and property, where he was a member for nearly 70 years. He also enjoyed golfing with those friends, when the work was done. He coached little league for his children, refereed basketball games at Hamilton Creek School, served on the school board there, and was a loving and committed father to his children. He served on St. Martins church vestry, and was always a part of any work parties or events at church, especially Shrove Tuesday pancake suppers, where he enjoyed his time in the kitchen. His brother Arland Christ, sisters Lucille Christ, Lucinda Grace and Leanora Fountain all are deceased, as is his oldest son, Kenneth Martin Christ. He is survived by Florence, his wife of 69 years, and his children, Marlin and Deanna Christ, Ellen and Greg Kosharek, Robert Christ, Mary Gerig and Darrell and Sue Coakley. He enjoyed every one of his six grandchildren and six great-grandchildren and they adored him. He will be sorely missed by his family and friends. Memorial donations can be made to Evergreen Hospice or St. Martin's Episcopal Church.

Ken was born at home in Lebanon, Oregon 96 years ago, to Iris Fitzwater Christ and Ernest Christ. He joined the US Navy in 1942, served during WWII in Puerto Rico, and was discharged in 1946. He was a logger when he met and married Florence... View Obituary & Service Information

The family of Kenneth L. Christ created this Life Tributes page to make it easy to share your memories.

Ken was born at home in Lebanon, Oregon 96 years ago, to Iris...

Send flowers to the Christ family.