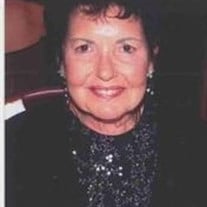 SALEM - Kaylene (Kay) Fay Hebert Snyder Walters, age 71 left her family and friends on August 5, 2011 at 11:50 pm at the Willamette Valley Medical Center in McMinnville, Oregon. Kay was born in Emmett, Idaho to James Glenn and Dora Lucille Hebert on 15 August 1939. She was the second child and first daughter. Siblings James (Jim) Hebert Junior, Geraldine (Geri) Pattan and Carol Nielsen survive her. Growing up on a small farm in a rural community, she learned the meaning of hard work - milking cows in the morning before school, picking cherries in the orchards on long hot summer days and working nights in the local cannery. A fun loving, free spirit, Kay had many friends. Upon her graduation from Emmett High School in 1957, she attended Boise Junior College (now Boise State University) majoring in business. In 1958, she married Roland Richard (Dick) Snyder and gave birth to their first child, Kathy Lucille. Their second and oldest son, Robert Earl (Bob) was born on the 21st of June 1960. Moving from a small town in Idaho to Southern California was quite a change for the young couple. However, Kay embraced the challenge with an open heart and mind. While working in customer service for Bank of America, Kay became pregnant with their third child, daughter Karin Kay born on September 25, 1968. Richard Roland (Rick) entered the world two short years later on September 28, 1970. Dick and Kay divorced shortly thereafter and Kay moved the family back to Emmett, Idaho. Meeting the love of her life, James Harold Walters in Boise, Idaho proved to Kay that "good things do happen to good people". The couple married on December 26, 1975 and lived in Hillsboro, Oregon with the two youngest children. They worked and raised their family in the Aloha/Beaverton area until Jim retired from Pendleton Woolen Mills in 1998 after 48 years of service as Wool Buyer. Kay retired from Bank of America and the couple moved to McMinnville, Oregon in the spring. Jim and Kay loved to travel during their retirement. They visited many ports of call including the Panama Canal, Australia, New Zealand, England, Spain and Italy, as well as three countries in South America - Chili, Argentina and Uruguay. Their domestic travels were equally exciting and numerous. Kay especially enjoyed trips to the southeastern states. Kaylene is survived by her husband, Jim; four children - Kathy Snyder, Bob Snyder, Karin Hobbs and Rick Walters, stepdaughter Jill Riley, seven grandchildren, six step-grandchildren and one great-grandchild. Memorial services are on Friday, August 12, 2011 at 1:00 pm at the Restlawn Funeral Home in Salem, Oregon. Graveside service to follow.

The family of Kaylene Fay Walters created this Life Tributes page to make it easy to share your memories.

Send flowers to the Walters family.