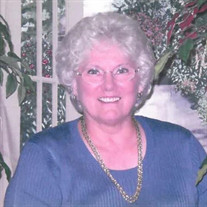 Judy Brahmer of Salem, Oregon died August 23, 2021 at the age of 83. She was born in Weymouth, MA on July 6, 1938 to Erle and G. Marion (Budgle) Van Buskirk. Judy married Edward L. Brahmer in California on December 20, 1960, he died in 2001. She attended Citrus H.S. in Azusa, California and then Chemmeketa Community College in Salem, Oregon where she graduated at age 50! Judy then began work as an LPN after years of wanting to become a nurse and retired from Salem Health in 2000. She was a member of Peoples Church and was very active in the women’s ministries until dementia made it impossible. She also traveled to many countries with Peoples Church on missions to help out local churches. Most of all she enjoyed baking and making candies with and for her children and grand children, she was a caregiver at heart. Judy is survived by children Edward L, Brahmer, Jr. (Erin) Salem, OR, Becky Cool, Salem, OR and Heidie L. Wines of New Braunfels, TX; Grandchildren Anja Brahmer (Michael Bacarella) Eugene, OR, Erik Brahmer (Rochelle) Sale, OR, Eleah Wines-Segura (Vinicio) New Braunfels, TX, Acacia Wines, New Braunfels, TX, Teil Wines-Frederick, Redmond, OR, Benjamin Wines, New Braunfels, TX; great grand children Jasper E. Noell, Olin Bacarella-Brahmer and Saskia Bacarella-Brahmer of Eugene, OR and Hazel Brahmer, Salem, OR. She is proceeded in death by an infant daughter Cheryl Brahmer; father Erle VanBuskirk; sisters Kathy Willette and Barbara Lake; mother Marion VanBuskirk. A private service was held at Willamette National Cemetery.

The family of Judith Brahmer created this Life Tributes page to make it easy to share your memories.

Send flowers to the Brahmer family.