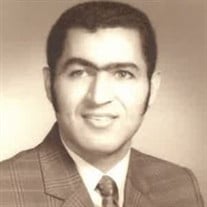 Joseph Rokni Karvandi passed away on Saturday, December 26, 2020 at the age of 81. He was born April 1, 1939 in Babol, Iran, to Ahmad and Hava Karvandi. He was the second son born out of four boys. His older brother is Mohsen Karvandi, following Joseph is Jalal Karvandi and the youngest is Jamal Karvandi (predeceased). He was surrounded by his wife Lori, and his three sons; Kevin, Jeff and Kyle, whom prayed over his body. Early in his teens, Joseph wanted a better life for himself. He wanted to learn the English language and enrolled in an American school in Tehran to learn. He fell in love with the sound of the English language and embraced it with gusto. In spite of his family’s disapproval to come to the United States, he finally convinced his Father that it would be best for Joseph’s future. Later his Father acknowledged that it was a good and wise decision. He entered New York in 1964 and had to attend school to get a GED. While staying at YMCA, he heard music and followed where the sound was coming from and discovered that it was a dancing class led by a Mrs. Frankel. She later became his mentor and was instrumental in assisting him while in in New York. Mrs. Frankel was a Blessing to Joseph. He spoke often of her kindness with fond memories. Joseph began his education journey in Polson, Montana, to study mining engineering. He soon found the extremely cold weather there was not working for him. The Consulate suggested that he go to Oregon where the weather was similar to Babol. Therefore, off he went to Portland, Oregon, and enrolled at Portland State University. Soon, thereafter, he met his wife, Lori, and married in 1967. He and his wife went to Iran in 1969 to meet the family and had a three-month vacation there and then on the way home, the family treated them to a short-stay honeymoon in Milan, Venice, Geneva, Paris and Amsterdam from there they took a plane home. Once back home, he enrolled at Western Oregon State College and with good counseling, he majored in Corrections. He graduated with his Bachelor’s Degree in 1972, and continued his studies and obtained his Master Degree in Corrections in 1976. Joseph started his career with the Oregon State Penitentiary, initially hired as part of a federally funded two-year grant program and later hired as a Vocational Training Counselor. Later, Joseph was promoted and advanced as an official Correctional Counselor with over 200 inmate cases up until he retired in 2003. He took his job seriously and stayed at his office daily until 6 pm (on his own time) to prepare himself for the following day’s meetings with inmates. He really enjoyed helping the inmates and counsel them how to make their stay better by complying with the rules.   He is survived by his loving wife of 53 years, Lori; children: Kevin, Jeffrey and Kyle; grandchildren: Abbi, Zach, Nicholas, Nathan, Natalie and Nolan. He was a loving father to his boys, Kevin, Jeff and Kyle. He never missed a game and loved to watch his boys play either soccer or baseball and was the loudest supporter there shouting “BRAVO” to each son as they made a goal in soccer, or hit the ball in baseball and ran to first base or made a home run. He was supportive of their education and made sure each boy had college education to secure their future. His oldest is Kevin and is presently employed as Commander with the Marion County Sheriff’s Office; Jeff is an Orthodontist in Missoula, Montana; Kyle is a CNA in the ICU at Salem Hospital. Good job Joseph! One of Joseph’s greatest joys was spending time with his family and creating memories with his grandchildren: Nicholas, Nathan, Natalie, Nolan, Abbi and Zacchary. Some of his fondest memories with them were at Placid Lake, Montana and Detroit Lake, Oregon, watching the kids play and enjoy water sports and sitting around sharing stories. FUNERAL SERVICES Funeral Services will be held on Sunday, January 10, 2021, at Restlawn Funeral Home, 201 Oak Grove Road NW, Salem, OR, Open Casket Viewing Hour 9 AM, Funeral Service 10 AM, Entombment in Mausoleum following Funeral Service. THANKS The family would like to acknowledge, with gratitude, the 24/7 supportive team services provided by Willamette Valley Hospice. The caseworker, various nurses, spiritual pastoral care, and sponge bather whom were always there to help and provide supporting guidance as things progressed until the end.

Joseph Rokni Karvandi passed away on Saturday, December 26, 2020 at the age of 81. He was born April 1, 1939 in Babol, Iran, to Ahmad and Hava Karvandi. He was the second son born out of four boys. His older brother is Mohsen Karvandi, following... View Obituary & Service Information

The family of Joseph R. Karvandi created this Life Tributes page to make it easy to share your memories.

Send flowers to the Karvandi family.