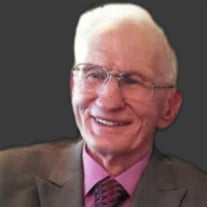 John Leonard Henderson March 30, 1924-October 28, 2021 John, Dad, Grandpa John was a vigorous, active alert 97 year old up until his final days. John was born March 30, 1924 to Blanche E. (Spaulding) Henderson and William R. Henderson. His "home city" was Tumalo, Oregon. Tumalo was a place and time remembered with great happiness with his family where he had freedom to roam widely and wildly with his 3 brothers: Paul, Robert (Jud) and Tom and 5 sisters: Martha, Pat, Mary, Olive and Shirley. All except Shirley predeceased him. With the coming of WWII, he joined the Navy as a Chief MM and spent most of WWII in the South Pacific. His ship left Pearl Harbor the day before the bombing. He saw the flag as it was raised on Iwo Jima. John was a Chief Engineer on his last two ships. At the end of the war, he was discharged and married Navy nurse Lt. Lillian Eddleman. They were married for 55 years and lived in the Albany area. Lilli and John had one daughter Blanche Estelle and chose to adopt son Kenneth J. Henderson (aka Freeman). Ken passed this October. A few year's after Lilli's passing, he was blessed to find his second wife Patsy McKee then of Woodburn. They met at church. They were married for 18 years until her passing this spring. They resided in Dallas, Oregon though during the early years of their marriage they criss-crossed the US several times. As dad put it "I have to believe in angels, I married two of them." John's adult stepchildren are Mitch, Karen and Bruce. "Since Patsy's death, her McKee family has given me more loving care than I knew existed." During his work years in Albany, John worked at Albany General Hospital for 15 years as Director of Plant Services at one point being visited by NASA scientists and receiving a commendation for innovation. Of utmost importance in John's life was God and the work he believed he was to do. He strived throughout his life to do God's work and will. To that effort he authored several books and many articles. After a short hospitalization with pneumonia, John was unable to regain his strength and passed Oct. 28. He will be greatly missed. As his step-daughter Karen wrote: Yes, joy for him (in passing). But earth has suffered a real loss.

The family of John L. Henderson created this Life Tributes page to make it easy to share your memories.

Send flowers to the Henderson family.