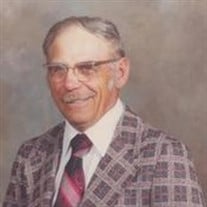 Salem - Our father was born in Trip, South Dakota in 1917 to immigrant parents, who came to help settle the Louisiana Purchase. He was a good student, but went only through the 8th grade. Then he and a brother stayed home to help take care of... View Obituary & Service Information

The family of John Hauck created this Life Tributes page to make it easy to share your memories.

Send flowers to the Hauck family.