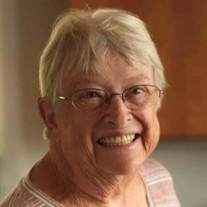 Joan Elizabeth Erickson, 86 years old, passed away on March 7, 2022, at her home in Rickreall, OR. Born in San Francisco, CA, on October 22, 1935, and raised in Santa Cruz, CA, Joan was a pioneering woman, earning a Bachelor's of Arts, Political Science (University of California, Berkeley, 1957), a Master’s of Education, Guidance, and Counseling (Oregon State University, 1967), and a Doctorate in Education, Guidance and Counseling (Oregon State University, 1971). Joan married Thomas E. Bedell in 1953, and raised three daughters in California and Oregon. Following her divorce in 1969, she married Kenneth W. Erickson, and raised another daughter and son. Joan had a long and fulfilling career in secondary education, including serving for 22 years as a guidance counselor at Talmadge Middle School in Independence, OR, before retiring in 1993. She worked especially hard for youth facing the most challenging of circumstances. Joan loved the rural landscape, settling in the Oak Grove hills of Polk County with Ken where they grew cherries, pears, blueberries, and eventually wine grapes. She loved farming: the self sufficiency, the physical and mental challenge, and the astonishing beauty of the Willamette Valley. As committed as she was to her home overlooking the valley, she was also determined to see, and understand, as much of the world as she could. She and Ken traveled extensively to all continents but Antarctica. Joan believed we all can (and should) work to repair the world. To make this world a better, more equitable place for all, she was a continual presence in the struggle for peace and justice. An active community member, Joan was a sustaining member of the Unitarian Universalist Congregation of Salem, and volunteered with many organizations, most recently End of Life Choices Oregon and Marion Polk Food Share. We deeply mourn our loving and beloved mother. She is predeceased by her parents, Julius Brown and Martha Knoch, and by her husband, Ken Erickson, who died in 2015. She leaves daughters Shelley Bedell (Portland, OR), Kristin Bedell and her husband Vincent DePillis (Seattle, WA), Robin Bedell McWalters and her husband Jack McWalters (Roswell, GA), Angela Denning and her husband Thomas Johnson (Salem, OR), son Luke Erickson and his wife Anja Otto-Erickson (Grafenau, Germany), stepson Jeff Erickson and his wife Darlene Erickson (Sutherlin, OR), stepson Peter Grafton Erickson, stepdaughter Maren Tunks and her husband Jeff Tunks (Tualatin, OR), as well as nineteen grandchildren and eight great-grandchildren. A memorial service will be held Friday, April 8, 2022 at the Unitarian Universalist Congregation, 5090 Center Street, NE, Salem, OR at 2:00 pm. In lieu of flowers, contributions can be made in Joan’s memory to the ACLU Foundation of Oregon, PO Box 40585, Portland, OR 97240, or at: https://action.aclu.org/give/tribute-aclu-or

Joan Elizabeth Erickson, 86 years old, passed away on March 7, 2022, at her home in Rickreall, OR. Born in San Francisco, CA, on October 22, 1935, and raised in Santa Cruz, CA, Joan was a pioneering woman, earning a Bachelor's of Arts, Political... View Obituary & Service Information

The family of Joan Erickson created this Life Tributes page to make it easy to share your memories.

Send flowers to the Erickson family.