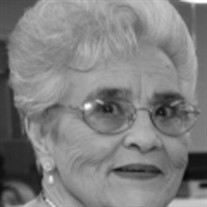 SALEM - Jean Pike, admired by her family and close friends, crossed through the veil to be with her previously deceased husband, Dwayne, and the Lord on the morning of December 31, 2012 surrounded by her children, Patti and Russ, and her granddaughter Carrie. On the previous Sunday evening visit, she shared precious moments and conversation with her children and seven of her eight grandchildren- Scott, Cindy, Carrie, Amy, Chris, Julie, and Dusty. Through the modern technology of Skype she was able to say goodbye to her other grandchild, Jenni. Jean was also the proud great-grandmother of five great-grandchildren. Jean is predeceased by her brothers Henry and Donald. Jean grew up during the depression and served as a Nurse Cadet during World War II, aiding wounded soldiers. After the war she became a nurse in a physician's clinic and eventually after moving from Illinois to California became the charge nurse for a group medical practice. Jean and her husband Dwayne retired to Salem in 1975 where she filled the lives of her children, grandchildren, great-grandchildren and friends with love and kindness and passed on her legacy to those she so loved. Jean understood that life on this earth was a brief gift from God, a flicker of time, to be used for good and kindness, before returning to her heavenly father. Jean took full advantage of this gift for 90 years, and wants all her family and friends to enjoy the peace she now has in the celestial kingdom. The family would be remiss if we did not extend her and our gratitude for the kind and loving care given to Jean by the staff at the Tokarski Home. A memorial service to celebrate Jean's life is planned for January 4, 1 p.m., at Restlawn Funeral Home, 201 Oak Grove Road NW, Salem, Oregon.

SALEM - Jean Pike, admired by her family and close friends, crossed through the veil to be with her previously deceased husband, Dwayne, and the Lord on the morning of December 31, 2012 surrounded by her children, Patti and Russ, and her granddaughter... View Obituary & Service Information

The family of Jeanna Mae Pike created this Life Tributes page to make it easy to share your memories.

Send flowers to the Pike family.