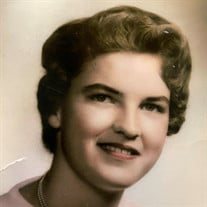 Jacquelin Mae Clukey Gettis July 24, 1939 - July 18, 2021 Jackie said her earthly farewell on Sunday, July 18, 2021 in Keizer, Oregon, just days shy of her 82nd birthday. We are deeply saddened to lose her and wish to share her life’s story with you. Jacquelin Mae Clukey was born on July 24, 1939 in Dover-Foxcroft, Maine. She was raised in the neighboring town of Sangerville, Maine, by her parents Boots (Lawrence) and Ruth Tripp Clukey, along with sisters Nora and Prudy. At age 18, Jackie joined the United States Navy and soon met her husband of 62 years, also enlisted Navy. Dick and Jackie were married on January 31, 1959 at the United States Naval Chapel in Washington D.C.. She and Dick then began their 20-year world tour serving their country. They raised three children and settled in Dick’s hometown of Salem, Oregon in 1974. During those military years, Jackie worked several retail jobs in the evenings and weekends to provide extras for the family, like Barbies and bikes, hula hoops and pogo sticks, Matchbox cars and roller skates. At one point, Jackie (and the kids) folded letters and stuffed and sealed envelopes for one cent each. In Salem, Jackie had a distinguished public service career with the State of Oregon, including working in the nascent Tourism Division and the Department of Justice, and received leadership recognition from Governor Victor Atiyeh. She was an ethical, dedicated professional and passed on the value of hard work to her children. In retirement, Jackie and Dick traveled with their beloved friends and doted on their grandchildren and great grandchildren. Jackie enjoyed making stained glass and making her home a destination for family gatherings. She was a card shark, a dancer, a creative writer, an avid crocheter, and above all else, a loving wife and mother. She collected toiletries for homeless shelters and made baby blankets for the hospital. She had a wicked sense of humor, couldn’t carry a tune, and was a prankster at Halloween. Jackie loved the Boston Red Sox and all things New England. She will be profoundly missed by her surviving immediate family: Daughters Teri Gettis Lemman and Carol Gettis Miller; son Stuart Gettis; daughter-in-law Jani Gettis; son-in-law Mike Miller; grandchildren Melissa Austin, Pamela Austin, Jackie Pasquarella, Rich Gettis, Michael Miller, Emily Barker and MaryAnn Olson; and precious great grandchildren Chase, Eemia, Amelia, Jackson, Etta, Aviana, Nora and Lilly who knew and loved their Gigi; and sister Prudy Bair. A remembrance for family and friends will be held at Restlawn Memorial Gardens, 201 Oak Grove Road NW, Salem, Oregon 97304, on Saturday, July 24, beginning at 12:30 p.m., immediately followed by an on-site reception with light refreshments and a graveside service with military honors. Contributions to the angels-on-earth at Brighton Hospice are encouraged and will be appreciated by the family. Checks should be made payable to Brighton Hospice, and mailed to 8050 S.W. Warm Springs Street, Suite 205, Tualatin, OR 97062. Please share your memories of Jackie on Restlawn’s memory page. But most of all, treasure and love each other.

The family of Jacquelin Gettis created this Life Tributes page to make it easy to share your memories.

Send flowers to the Gettis family.