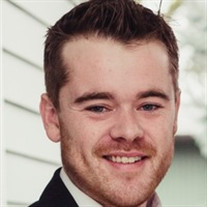 Ian Timothy Crosby September 16, 1985 - December 4, 2020   Ian was born in Salem, Oregon on September 16, 1985.  His namesake grandfather, John Crosby, officiated when his parents, Timothy John and Cynthia Osborne Crosby, dedicated him to our Heavenly Father as a baby.  He was always a happy little boy.  He would tag along to keep up with his big sister, Claire, who made room in her heart to love her little brother.   He attended Myers Elementary, Heritage School, Walker Middle School and South Salem High School.  He made friends easily and had a quick laugh and wit.  His handsome looks, smile and big heart charmed all those he shared his love with.  He played and loved baseball and survived football.  When asked how many concussions he really had during high school football, he confessed too many more than the four or five his parents were aware of.   Ian studied at Linfield College and Oregon State University.  He was a dedicated Beaver fan and Bronco’s fan, due to his parent’s Colorado roots.  His real love in sports was for the Chicago Cubs.  One of the highlights of his life was to attend a game at Wrigley Field when the Cubs and the Brewers were in the Playoffs.  The Cubs won that day and he didn’t want the moment to pass, so he and a friend were the last ones to leave that section of the stadium.  The Cubs went on to win the 2016 World Series, the first time since 1908.  Ian felt that win was for him.   Ian loved to be outdoors.  There were many fun camping trips to Detroit Lake with his grandparents and cousins.  The family and friends backpacking trips to Pamelia Lake are such good memories, as were many backpacking trips in the Pacific NW with his buddies.  He also loved to travel.  He designed his own body art tattoos on his left arm showing many of the countries he was able to see and experience - the major cities of Spain, France, England, Costa Rica, South Africa and Zimbabwe.  During Ian’s time in Zimbabwe he worked with a friend to set up the kitchen for the opening of a new school, Tots Academy Kindergarten and Preschool in Harare. Ian dedicated his life to the service of others.   He liked to sketch and paint scenes from his life.  He was a keen board game player with frequent challenges to beat him in Scrabble.  He loved being around kids, and they loved being around Ian.    He will be deeply missed by his mother, Cynthia Osborne Crosby; his sister, Claire Fulsher (Crosby), and brother-in-law, Kevin Fulsher, adoring nieces, Audrey and Charlotte; his father, Timothy Crosby and Ian’s “Mama,” Kathy Crosby; his sister, Marci O’Sullivan, brother-in-law, Chris O’Sullivan, numerous nephews and nieces; his best friend, Louisa Russell; as well as many other friends and family members.   Due to the pandemic, there will be no public memorial for our son, Ian Crosby.  There will be a memorial placed for him in the Crosby family plot at Restlawn Memory Gardens & Funeral Home (201 S Oak Grove Rd NW, Salem, OR 97304) located in the "Garden of the Apostle".  We will post when it has been placed and encourage all who loved Ian to visit and pay their respects as is safe and convenient.   Alcohol abuse is such a misunderstood and cruel disease. For those who would like, a contribution in Ian’s name may be made to Serenity Lane. https://serenitylane.org/make-a-donation/

The family of Ian Timothy Crosby created this Life Tributes page to make it easy to share your memories.

Send flowers to the Crosby family.