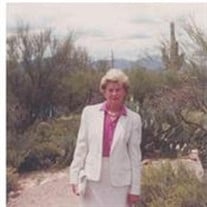 Richland, WA- Formerly of Salem, Harriett Muriel (Joslin) Greenwell was born on May 18, 1921 in Hamilton, Ontario Canada to William Ralph Joslin and Zella Lela Coon. She had one brother, Ralph William Joslin. Harriett passed peacefully from this life Wednesday, September 28, 2011 in Richland, Washington. Harriett married Alvin Hope Greenwell on August 5, 1941 and they were married 63 years, and had three children. The family moved to Salt Lake City, Utah and lived there until 1962 and then settled in Los Altos, CA where they lived until retiring to Arizona and eventually Salem, OR. Harriett was best known for her many talents, cooking, decorating and sewing, that enriched all our lives. Always kind and caring, Harriett was charming with a great sense of humor. She quickly made friends with all she met. Harriett is greatly loved and survived by her children, David (Shirleen) Greenwell, Don (Jay) Greenwell, and Nancy (George) Demcak; 10 grandchildren and 20 great-grandchildren, and sister-in-law, Gert Joslin. Private family services were held Tuesday, October 4, 2011 at Belcrest Memorial Park. Arrangements are by Restlawn Funeral Home.

The family of Harriett Muriel Greenwell created this Life Tributes page to make it easy to share your memories.

Send flowers to the Greenwell family.