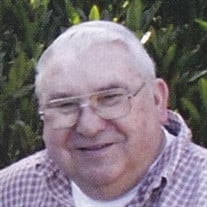 Turner - Glen was born in Bowmont, Idaho on September 22, 1930 to Tallie Joe and Frances Lyda. He attended school in Nampa, Idaho and Northwest Christian College in Eugene. He married Lois Elaine Wagner on April 13, 1950 at the Nampa Christian Church. They raised four children. After college Glen ministered on the weekends at churches and drove log truck for Siegmund Lumber and later veneer truck for Green Veneer in Idanha. In 1962 he became the full-time minister at Molalla Christian Church until 1967. Starting in 1967 he managed Wi-Ne-Ma Christian Camp in Tillamook County until he retired in 1996. He reveled in the job because it encompassed God, kids, missions and machinery. He built the water system, wastewater system, a gym and other dorms along with RV areas, a prayer garden on the hill, along with a giant slide, miniature golf course, ropes' course, and BMX course. He had his camp kids rollerskating, playing basketball, baseball and volleyball, golfing, picnicking on the beach on Wednesdays and made sure there were lots of places to have individual devotionals in natural settings. His friend Martin Boatwright engineered and dreamed with him. Carl Roth of Lebanon made the construction happen with him. And many, many fun-loving, hard-working volunteers worked beside him, sharing soft ice cream, meals, coffee breaks and laughs with him and his sidekick/son, Tim. Northwest Christian College bestowed an honorary Doctorate of Humanities on him for his visionary work in Christian camping. He enjoyed people and was on a first name basis wherever he picked up supplies for camp - the bread shop, plumbing shops, the wholesale grocery stores, the shipyards, to name a few. He was a savvy businessman in his personal and professional life. It was his idea for his daughter, Beth, to start Waterlab Corp in the late 1970's , then he helped Cheri and Ralph start Beads of Bainbridge a few years ago. He is survived by his beloved wife and partner in everything for 62 years, Elaine, his son and daughter-in-law, Tim and Diane, daughters and sons-in-law, Beth and Mike Myers, Cheri and Ralph Brune, 6 grandchildren, 4 grandchildren-in-law, 5 great grandchildren, his brother and sister-in-law, Don and Niletta Lyda, sister-in-law, Betty Lyda, many nieces and nephews and cousins. His oldest son preceded him in death. A family service was held at Turner Christian Church. The family thanks Dr. Lance Large and his staff for their compassionate and thoughtful care of Glen after he moved to Turner Retirement Home in 2009. Glen's latest mission interest was a CMFI (Christian Missionary Fellowship) project that provides rural village people with a low-cost reliable mode of transportation (BUVs) to secure water and food items in Tanzania. If you would like to donate to this project in his memory, please send donations (payable to CMFI and designate "Project # 719100, Tanzania Small Business Projects): CMF International, PO Box 501020, Indianapolis, IN 46250. Arrangements by Restlawn Funeral Home.

Turner - Glen was born in Bowmont, Idaho on September 22, 1930 to Tallie Joe and Frances Lyda. He attended school in Nampa, Idaho and Northwest Christian College in Eugene. He married Lois Elaine Wagner on April 13, 1950 at the Nampa Christian... View Obituary & Service Information

The family of Glen Howard Lyda created this Life Tributes page to make it easy to share your memories.

Send flowers to the Lyda family.