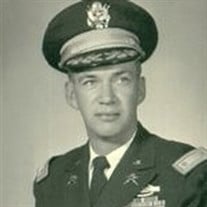 George T. Bennett passed away on June 10, 2010 in the arms of his daughter, Linda Lange, and his son, Darrell, and family surrounding him. George was born in West Virginia. While a teenager, he found his career and his calling in the military. He enlisted in the United States Army in January, 1941. He was originally stationed in Alaska and often told stories about learning to ski and being perpetually cold. After Pearl Harbor he saw combat duty in the Marshall Islands, earning a Bronze Star and other combat medals. As the war ended, he was sent to Palau to assist with prisoners-of-war management. In 1942, George met the love of his life, Hazel Stockstill, at a USO dance in Ashland, Oregon. They married in 1943 and were devoted to each other until her death in March, 2007. George and Hazel made their home in Ashland where their two children were born. They relocated over the years with George's Oregon National Guard duties to Grants Pass, Eugene and Salem where they resided from 1963. George retired from the National Guard with the rank of Lt. Colonel. He remained active and interested in various military groups and activities throughout the years. George also enjoyed doing household repairs, carpentry, ballroom dancing and taking long drives with Hazel. George's children, granddaughters, Kimberly Bennett and Karen Bennett Adams, great grandchildren, Marlee and Mason Adams, daughter-in-law, Donna Sandoval Bennett, and son-in-law, William Lange, mourn his loss. They are comforted knowing he is with Hazel once again. Funeral Services will be held at St. Paul Episcopal Church, Salem, on Friday, June 18, at 1:00 p.m. with a reception at the church following the service. Concluding services and internment with military honors will be at 3:00 p.m. at Restlawn Memory Gardens. The family requests, in lieu of flowers, donations be made to MOWW (c/o 4966 Kinsington Salem, OR 97302 ) benefitting war veterans and providing youth scholarships.

George T. Bennett passed away on June 10, 2010 in the arms of his daughter, Linda Lange, and his son, Darrell, and family surrounding him. George was born in West Virginia. While a teenager, he found his career and his calling in the military.... View Obituary & Service Information

The family of George T. Bennett created this Life Tributes page to make it easy to share your memories.

Send flowers to the Bennett family.