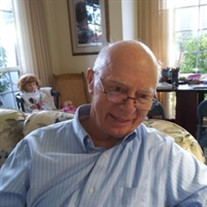 Gary Allen Gislason 1/1/1942 – 12/11/2020 Gary Allen Gislason was born in Spokane, Washington on January 1, 1942. His parents, Joe and Myrtle Gislason, while originally from North Dakota, raised Gary and his sister Joyce on a farm that was part of the original Matanuska-Susitna Colony settlement in Wasilla, Alaska. Gary graduated from Wasilla High School in the spring of 1959, just a few months after Alaska had been admitted as the 49th state. After an additional year working on the farm, Gary enrolled at Oregon Technical Institute (now OIT) in Klamath Falls, Oregon for two years (1960-62) until changing course from Auto Mechanics to pursue an undergraduate degree in Mathematics from the University of Alaska Fairbanks (UAF). After matriculating in 1966, he again returned south for graduate studies at the University in Oregon, eventually earning a Ph. D. in Numerical Analysis. During his time at U of O he married the one love of his life, Saramarie Gislason (nee McLin), in June of 1967. He was hired as an associate professor at UAF in 1970 and he and Sara moved to Fairbanks to start their family. They welcomed two children, Eric and Lisa, born in October 1970 and March 1972 respectively. Gary taught in the Mathematics department at UAF with distinction for nearly 30 years. During his career in the classroom, Gary earned the inaugural Usibelli award for outstanding undergraduate teaching (1992) and also served as advisor to the first students ever granted Ph. D.’s in Mathematics at the university. He also played a pioneering role in the math department’s innovative Distance Education effort, making numerous trips to remote villages in northern Alaska to counsel students in math and expand the university’s educational mission to the farthest-flung regions of “the Great Land.” After his retirement in 1998, Gary and Sara left their home in Fairbanks and moved to Salem, Oregon, where they lived for the remainder of his days. During their time in Salem they were delighted to welcome their three grandchildren—Claire, Aria, and Katherine—into the world. Gary and Sara’s home was a haven to friends and family from far and wide, and they entertained dozens of visitors through the years with warm hospitality and delicious home-cooked meals. Gary was a great grill man and earned a deserved reputation for his salmon and steaks. Despite all these domestic successes, professionally he “failed” at retirement and worked for another 10 years as an adjunct professor at Willamette University. Finally, after this additional decade of devotion to his beloved mathematics, he put down the chalk for the last time. Gary was a man of great Christian faith, and his conviction was both a comfort to him and an inspiration to others throughout his life. Despite his intellectual achievements he was humble, kind, and unpretentious; his curiosity allowed him to converse on subjects both sacred and secular with people from all walks of life. He will be fondly remembered for his insights and his gentle sense of humor, for his devotion to his friends, for his unconditional love of his wife and children, and for his deep and lifelong belief in the power of the Holy Spirit. Whether you experienced Gary as a student or a colleague, an RC aviation enthusiast or a neighbor, a fellow believer or an agnostic, a friend or a father, a grill man or a grandfather—you knew a man with a soft heart, a nimble intellect, a generous spirit, and an abiding hope in Jesus. Gary, you will be deeply missed.   Predeceased by his father, Joe, Gary is survived by his mother Myrtle and sister Joyce of Wasilla, Alaska; his wife of 53 years, Sara; his son, Eric (Sarah) of Seattle and granddaughters Claire and Katherine; his daughter Lisa (Clarke) of Salem and granddaughter Aria. In lieu of flowers, the family asks that you donate to the Marion Polk Food Share or another charity serving those less fortunate during this time of great nationwide need.

Gary Allen Gislason 1/1/1942 &#8211; 12/11/2020 Gary Allen Gislason was born in Spokane, Washington on January 1, 1942. His parents, Joe and Myrtle Gislason, while originally from North Dakota, raised Gary and his sister Joyce on a farm that... View Obituary & Service Information

The family of Gary Gislason created this Life Tributes page to make it easy to share your memories.

Send flowers to the Gislason family.