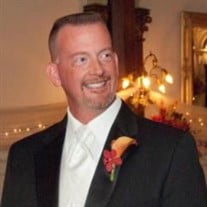 Not sure what to send?

Garry Eugene Russell Garry passed away on June 15, 2022 after a 7 month battle with Non-Hodgkins Lymphoma. Garry was born September 1969 to Gary and Barbara (Sloan) Russell in Salem, Oregon. He spent his early years attending school in Keizer, Oregon and graduated from Salem Academy in 1989. He is survived by his wife Marti, son AJ, step daughters Lexi (Ian) McKenna, and McKynna Berning, three grandsons Kaden, Callum, and Axton, his sister Charlene (Ryan) Ellis and nieces Josie, Kali, and Faith and nephews Seth, Luke and Adam. Upon graduation Garry served 4 years in the US Air Force during which time he was awarded several medals of accommodations. In 1996, following serving in the Air Force Garry began a career with the Oregon Department of Corrections beginning with the rank of corporal. He retired in May after serving for over 25 years at the rank of captain . He spent many years on various specialty teams and workgroups. He was a trusted resource for the Governor’s Office, other states, and law enforcement agencies on security and emergency preparedness. Garry was integral in the statewide planning for the Cascadia Subduction Zone earthquake. He was most recently the Use of Force and Emergency Manager – spearheading the Agency Operations Center (AOC) throughout the COVID-19 crisis. Garry was an avid runner, having completed several marathons and participating in over 13 Hood to Coast races the last being this past August. He was the biggest Ducks football fan, and for several years he and his wife never missed a game, whether home or away to show support to those who became like family. Garry and Marti loved to travel and were fortunate to travel often, whether it was to Duck football games, Curaçao, Europe with friends or to the 2016 Olympics with friends to support those they hold dear. In 2019, Garry was able to take AJ on a once in a lifetime father son trip to Philadelphia to celebrate AJ’s birthday with the assistance of the Philadelphia Eagles. Garry lived life to the fullest and remained optimistic until the very end. “ Choose to be optimistic, it feels better” Dalai Lama Nothing was more important to Garry then his family. Please join us for a celebration of life Wednesday, June 29th at 1:00pm at the Salem National Guard Armory Auditorium.

The family of Garry Eugene Russell created this Life Tributes page to make it easy to share your memories.