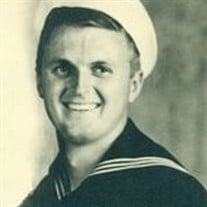 Franklin N. Barth, 91, of Salem went home to be with his Lord and Savior, Jesus Christ, Friday, August 7, 2009. Frank was born March 12, 1918 to Charles and Floy Barth in Iola, Kansas, and was the third generation to farm the Barth homestead through the Great Depression. In 1939, Frank and his mother Floy, moved to the Willamette Valley to join his father, Charles, and brother, Howard, who had relocated to Oregon one year earlier. As a family, their determination to make a new life for themselves in the "Garden of Eden," caused them to follow the crops and move frequently. They eventually settled in Salem. Frank was called to duty by the United States Navy at the beginning of World War II. Though an uncertain and dangerous time in his life, he would later reminisce frequently about his service to God and country. As a Machinist's Mate 3rd Class, seeing a new part of the world would be the highlight of his personal life, until he married Kate Lavina Pomeroy of Aumsville, Ore. soon after the war. He chose not to marry Lavina until after the war, not wishing to take the chance of widowing the love of his life. Over the next ten years George, Russell and Steven were born. At age 73, Frank would bear the heartache of burying his beloved wife and his youngest son Steve, within a year of one another. His faith in Jesus never faltered even in those tough times. Frank and Lavina attended faithfully three Churches over a 45 year span; Halbert Memorial Baptist, Salem Bible Church, and The First Church of the Nazarene. In each place, this tall gentle man served faithfully and quietly. Through out life he always looked for opportunities to share his faith. Numerous times Frank would express openly about how important it was to him and his wife that their three boys and their families would someday be together again in Heaven. He was convinced that this day of reunion was coming soon and held on to the promises of God for strength. Frank worked at several jobs including Cascade Meat Company and Ed Bennett Construction, but ultimately retired after 20 years at the Salem Hospital. He is survived by his two sons, George of Seattle and Russ of Dallas, and their wives, Lauri and Sharon; grandchildren, Tia, Lonny, Derrick, Sarah, Selena and Chris; seven great-grandchildren; one great-great-granddaughter. In additon, Frank and Lavina had a special love in their hearts or their extended family of nieces and nephews, along with Kathy Norcott and Ian McCarther. Though they never possessed much from a worldly prospective, their hearts and home was always open to anyone who needed love and a safe place to sleep. All who know Frank will miss him deeply. A "Remembrance Service" will be held at 12 noon on Saturday, August 15 at Restlawn Funeral Home. In lieu of flowers, donations may be made in Frank's name to the Salem Pregnancy Resource Center, P.O. Box 5302, Salem, Ore. 97304.

Franklin N. Barth, 91, of Salem went home to be with his Lord and Savior, Jesus Christ, Friday, August 7, 2009. Frank was born March 12, 1918 to Charles and Floy Barth in Iola, Kansas, and was the third generation to farm the Barth homestead... View Obituary & Service Information

The family of Franklin Newton Barth created this Life Tributes page to make it easy to share your memories.

Send flowers to the Barth family.