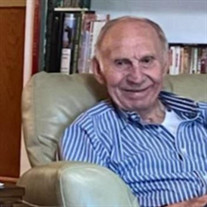 Born: December 1929 – Buchanon, North Dakota Died: October 15, 2021 – Salem, Oregon Donald J. Prodzinski, who was also known to many in the Salem area, as “Don the Barber” passed away peacefully on Friday, Oct. 15, 2021, due to complications from advanced Parkinson’s. He was 91 years old. Don was the busy man behind chair #1 at Don’s Barber Shop and was also the first person to greet every patron who walked into his shop, and it remained that way for 40 years. To him, every customer was a cherished asset and he made it his mission to learn each customer’s name and to express his genuine appreciation for every person who walked through his door. Upon his retirement in 1998, he also made it his mission to enjoy life to its fullest with his dear and loving wife, Patsy (Keiser) Prodzinski. The loving couple had wed in 1953 when Don rode the train back home to Jamestown, upon completing basic training in the US Army, and their marriage would continue to flourish for the remaining 68+ years. Don and Patsy raised their 4-children in the process: Karen (Brad) Yates, Debra (Mark) Voorhis, Mark (Meg) Prodzinski and Donna (Bill) Isabell. Don and Patsy also enjoyed the love of their two beautiful granddaughters, Lacie Hart and Taylor Isabell, as well as their two great-granddaughters, Alivia Hart and McKinley Hart. Becoming a barber was never a blip on Donald’s radar while he was a kid growing up and working on the family farm near Buchanon, North Dakota during the lean Depression years. And while the farm work numbed his fingers and often limited his opportunity to attend the local country schoolhouse on a regular basis, it certainly ingrained in him the values of everyday hard work. He toiled on the family farm and also hired-out doing farm work for others in the surrounding area until about 1949, and then spent two winter seasons working deep underground in the Black Hills of South Dakota at the Homestake Gold Mine located near Deadwood. He claimed that the cold wind never blew and that the weather was always the same each day underground. But after narrowly escaping a dangerous tunnel collapse one day at the mine, he opted once again to seek a different occupation. He then worked as a drill rig operator for Mac Exploration Company in the states of Wyoming, Nevada and Utah, until a bad bout with Tuberculosis sidelined and nearly ended his life in 1956. In 1957, Don and Patsy pulled-up stakes, said goodbye to Utah, and moved to Portland, Oregon where Don enrolled and graduated from Moler Barber College - believing that a barber’s life would keep him dry and out of the wind and cold. In 1958, the couple relocated to Salem where Don began barbering and eventually purchased the shop in SE Salem that would bear his name and signify his success there for the next 4-decades. Don always remained a man true to his word, his handshake was his bond, and he was always willing to help another person in need. He could also be depended upon to finish whatever task he set out to do, regardless of the difficulties. He also possessed a well-honed sense of humor - as judged by anyone who happened to be present in the barbershop whenever Don felt it suddenly necessary to tell a funny story. He was a solid rock to lean upon, not just for his family and friends but for his entire community. He will be greatly missed! Donald was preceded in death by his parents, Edward and Louise Prodzinski, his sisters, Phyllis Leysring and Loraine Schwartz (all from Jamestown, ND) and his brother, Richard Prodzinski (Salem, OR). He is survived by his wife, Patsy along with their four children, two grand daughters and two great-grand daughters. He is also survived by his two remaining brothers, Melvin Prodzinski (Milford, UT) and Harold Prodzinski (Seattle, WA). A funeral for Donald will be held at the Queen of Peace Catholic Church in Salem, OR on October 30, 2021, at 11:00am. And at 2pm on November 2, 2021, Donald’s ashes will be transferred, with military honors, to the Willamette National Cemetery in Portland, OR.

The family of Donald J Prodzinski created this Life Tributes page to make it easy to share your memories.

Send flowers to the Prodzinski family.