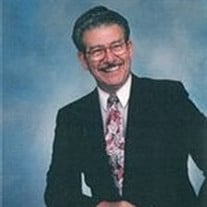 Dr. Dale G. Parker September 29, 1924 - October 11, 2008 KEIZER - Dr. Dale George Parker completed his time on earth and began Eternity with his Wonderful Lord Jesus Christ on October 11, 2008, at age 84. Dale George Parker was born in St. Louis, Missouri, to Dale Hamilton Parker and Inez Lucille Dunlap on September 29, 1924. Dale grew up and graduated from high school in Trenton, Missouri. His Missouri family knew him as Buss. He proudly served in the US Navy in the Pacific during World War II. Following his time in the Navy, Dale attended Drake University and University of Iowa. He completed his Doctor of Dental Surgery (DDS) and Master of Science (MS) in Orthodontia. During school Dale worked as a short-order cook in a bowling alley, drove an ice cream truck, worked in the canneries in California, and taught high school for a year in Baxter, Iowa. While in Baxter, he led a Boy Scout troop and was proud to have seven of nine troop members become Eagle Scouts. Dale and Glenda E. McMurry married in December 1945. They divorced in 1969. They had six children Mike, Shaun, Danny, Kelly, Lori Ann, and Steve. Dale moved to Salem in 1953 and established his practice as an Orthodontist. He said he practiced during "the golden age of orthodontia". He based his orthodontic practice on the principles that "no case would be too tough and no family would be too poor" for his services. He served about 5,000 families from 1953 - 1983. He regularly had patients travel from out-of-state, and he served many families at no cost. Soon after the death of his son, Danny in 1957, Dale accepted Jesus as his Lord and Savior. As a new Christian, Dale taught Sunday school, couples class, traveled with International Christian Leadership, and served as a volunteer counselor in the Oregon Corrections system. Jesus had transformed Dale's life, and he shared the same blessing with many others. One of those he introduced to Jesus became his loving wife. Dale and Teresa Lee Gilfeather Staat met in 1970 and were married July 21, 1973. Dale and Lee have a daughter, Heather, and helped raise a granddaughter, Tayce. Through the years additional folks also became family to Dale and Lee. Dale and Lee's life together has been intertwined with ministry to the Lord. They greatly loved and supported one another during their 35 years of marriage. Dale usually had a Bible study in their home. He was ordained in 1979, and the Bible study grew into church. Living Waters Fellowship was a storefront church in Keizer in the 1970's and 1980's. The church had a Food Bank, and serving the needs of the hungry was near to Dale's heart. Dale also ministered in South Africa, Philippines, and Thailand. Dale was always a man of many interests, and he never did anything half way. He owned horses and built Glendale Acres in SE Salem during the 1960's. He began cutting gemstones and making jewelry in the early 1970's and built The King's Jewels jewelry store in Salem in the 1970's. Dale's son, Danny; his father; his mother; and his sister, Evey Watt preceded Dale in death. Dale is survived by his wife, Lee; sons, Mike of Sandpoint, Idaho, Kelly (DeAnna) of Argyle, Texas, and Steve (Cindy) of Salem; and daughters, Shaun Lawson of Salem, Lori Ann (Terry) Langston of Silverton, Heather (Dave) Flowers of Spokane, Washington, Tayce (Adam) Rogers of San Diego, Mary (Mark) Philp of Salem, and Rosalinda Limas of Salem; and grandchildren, Tayce Rogers, Jennifer Shewey, Justin and Joshua Swinkels, Danny, Ashley, and Lexie Parker, Kristen Parker, Jayda and Mallory Flowers, and Nathan Sallee; and great-grandchildren, Phoebe and Carter Rogers, and Lilly and Benjamin Shewey. In lieu of flowers, contributions may be made to Inner Court Ministries, 948 Nandina Ct. NE, Keizer, OR 97303 or The Christian Broadcasting Network, 977 Centerville Turnpike, Virginia Beach VA 23465-9975. At Dale's request, services will be private with arrangements by Restlawn Funeral Home.

The family of Dale G. Parker created this Life Tributes page to make it easy to share your memories.

Send flowers to the Parker family.