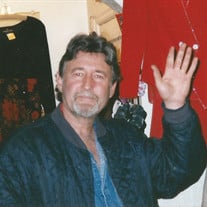 Craig Lee Calaba 12/6/1949-3/24/2022 Turner, OR- Craig passed away peacefully at home with his loving wife Kim by his side on Thursday 3/24/2022. His parents, Jerry and Mildred Calaba as well as his brother Eric Calaba preceded him in death. Craig is survived by his Wife Kim, Brother Michael Calaba and Sister in-law Tana: Sons Corbin Calaba, Jerry Calaba, and Jason Overhuel: Granddaughter Kyah Calaba, Grandson Orion Overhuel: In-laws Gerald and Caroline Freeman: Brother in-law Jerry Freeman and his Wife Heather, Sister-in-law Michelle Cameron and her Husband Larry: Nieces Melanie Pickerall and her Husband Paul, Kayla Freeman: Nephews Darren Calaba and his wife Sumika, Shawn and Scott Cameron, Matthew and Jonah Freeman: Life long friends Jon Jaeger, Bernie and Debbie Jueden, Mike Jaskoski, and Jim Hunter. Craig was born in Salem Oregon and graduated from South Salem High School in 1968. After graduating, he went on to study breifly at OCE College in Monmouth, Oregon, when he was called to serve his country for 6 years in the US Marine Corp Reserves. He had a 30 year career with Oregon Department of Transportation. Craig always loved all things outdoors. He had a fascination with history. If anyone ever needed help with anything, Craig was always quick to help others. Friends, Family, and neighbors knew they could call on him for help at anytime. In his free time, Craig could be found doing yard work, going golfing, camping, fishing, target shooting, and hunting was once a hobby of his. He loved tinkering on projects in the garage. His friends have fond memories of winning Craigs money playing Poker. He always enjoyed spending time with his Grandchildren. The Calaba family would like to express their sincere and heartfelt thanks to his primary care physician, Dr. Mark Vanderburgh at Salem Clinic, First Call Home Health and Willamete Valley Hospice teams for their professional and compassionate care for Craig during his illness. Words can not express how much this meant to his friends and family. A celebration of life will be planned at a later date. Memorial contributions may be made to Alzheimer's Association, Willamette Valley Hospice, Wounded Warrior Project, UGM of Salem, or alivingtribute.org. Arrangements by Restlawn Funeral Home.

Craig Lee Calaba 12/6/1949-3/24/2022 Turner, OR- Craig passed away peacefully at home with his loving wife Kim by his side on Thursday 3/24/2022. His parents, Jerry and Mildred Calaba as well as his brother Eric Calaba preceded him in death. Craig... View Obituary & Service Information

The family of Craig L. Calaba created this Life Tributes page to make it easy to share your memories.

Send flowers to the Calaba family.