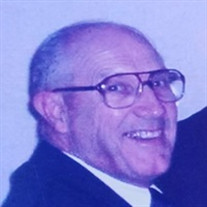 Clifford (Cliff) Roland Girod passed February 19, 2021 in Salem, Oregon. He was born March 27, 1930 to Lawton and Wilma (Garner) Girod and attended Highland Elementary School, Parrish Middle School, and Salem High School (now North Salem High School) graduating in 1948. He lettered in baseball and basketball, was a member of the National Honor Society and President of the Letterman’s Club. He and his brother were part of the runner-up state championship basketball team. Cliff attended Willamette University, graduated in 1952 and earned his teaching degree in 1953. He lettered in baseball and basketball and was a member of the Sigma Alpha Epsilon fraternity. He was part of the 1952 basketball team that won four straight Northwest Conference Championships. He earned All-Conference second baseman honors and played semi-pro baseball during the summer months. He was inducted into the Willamette Sports Hall of Fame with the 1952 basketball team. In 1953 he played basketball on the Salem YMCA team that won the regional championship and advanced to the National Championship in High Point, NC, which was ultimately won by the team from Philadelphia starring Wilt Chamberlin. He taught and coached for a year at Brookings (OR) High School before serving two years in the U.S. Army; the last year of which was in Korea with the 501st Communications Reconnaissance Group. While in Korea he played in the Far East Armed Services basketball championship game in Tokyo, Japan. After his time in the US Army, Cliff taught and coached in Gervais, OR then moved on to South Salem High School (OR) in 1959 where he worked for 17 years as a mathematics teacher, baseball coach, counselor, and Dean of Boys. His final 10 years in education were at McNary High School as counselor and Guidance Chairman, retiring in 1986, the same year that he was awarded Educator of the Year. To supplement his career in education, Cliff grew a thriving summer house painting business which he continued full-time until his retirement. Cliff and Anna Ritchey (Brookings, OR) were married in 1954. They had four children before divorcing in 1970. After, Cliff married Jeanie Rhodes Brown (Salem, OR), also an educator, in 1971. They recently celebrated their 49th anniversary in Salem, OR. Cliff always enjoyed working with young people in his church and other volunteer activities. He joined the Gideons organization in 1987 and remained active for 25 years as the Church Assignment Coordinator. He enjoyed speaking to congregations and fundraising to support the distribution of Bibles world-wide. He is survived by his wife Jeanie Girod, and children Curtis (Kathy Janz) of Philadelphia, PA; Douglas (Susan Pirtle) of Lawrence, KS; Eric (Cynthia Burts) of Sherman Oaks, CA; Elizabeth (Scott Popovich) of Coto de Caza, CA; and Julie Plummer of Scottsdale, AZ. He also had 12 grandchildren and 4 great grandchildren. His sister Ethel Costello and her family and his brother Daryl Girod and his family also survive him. His favorite Bible verse exemplified his life. Colossians 3:23 “Whatever you do, work at it with all your heart, as working for the Lord, not for men”. Cliff will long be remembered and loved by his family, neighbors, co-workers, friends and former students for his Christian faith, love of sports, strong work ethic, playful spirit and warm loving demeanor. He never failed to offer a smile and friendly “how you doing?” for everyone he met. Services will be held on August 28th at 1:00 at First Baptist Church of Salem with a reception to follow. A picnic will be held at 5:00pm at Girod Park in West Salem in Wood Haven Estates." Please join us to celebrate Cliff. Funeral arrangements are being handled by Restlawn Funeral Home. In lieu of flowers, donations may be made to The Gideon's International, Salem Camp, South. Service will be Live Streamed at https://www.facebook.com/therealfirstbaptist

The family of Clifford Girod created this Life Tributes page to make it easy to share your memories.

Send flowers to the Girod family.