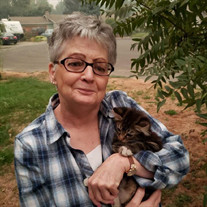 Carolyn “Sue” Van Cleave passed on April 7th, 2022 at the age of 73 years. Sue was born to Violet Davis and George Weaver on August 12th, 1948 in Morgantown, West Virginia. She moved from Morgantown, West Virginia to Gresham, Oregon in 1955 and then to Salem Oregon in 1958. Sue graduated from South Salem high school in 1966 and thereafter married Duane Van Cleave and started a family in the Keizer area raising their two daughters. Sue and Duane worked alongside each other in the automotive and towing industry for many years prior to their divorce in 2006. Sue has been an active resident in the Salem-Keizer area throughout her life and enjoyed working with people. Sue enjoyed artisan work and loved sharing her creations with family and friends. She had a love for reading, quilting, beading, and sewing. She frequently participated in craft expos and shows around Oregon throughout her life. Sue cared deeply for those around her and cherished her family including her beloved cat Penny. She is survived by her sister Robyn Johnson, daughters Shelly (Rich) Duncan and Shannon (Cory) Ziglinski; grandchildren Justin, Jordyn, Matt, Brain, Ashley, Skyla, & Delaney; Great grandchildren Alex, Jesse, Jacob, Tyler, Zoey, Brooklynn, and will be reunited with great grandson Bentley in rest. Sue was preceded in death by her father George Weaver, mother Violet Johnson, brother Kenny Weaver, and great grandson Bentley Tucker. Sue touched the lives of those around her and will be dearly missed. Funeral services will be held at 10:00 am, Friday, April 22nd at Restlawn Funeral Home with interment following at Restlawn Memory Garden and reception to follow.

The family of Carolyn Van Cleave created this Life Tributes page to make it easy to share your memories.