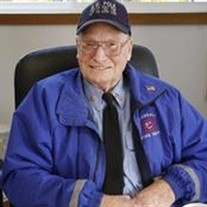 RICKREALL - Calvin "Cal" Kennedy, 82, passed away peacefully in his home on August 22, 2012. He was born February 7, 1930 to Clinton and Jewel Kennedy in Chehalis, Washington, and lived most of his life in the Salem/Rickreall area. He married his high school sweetheart, Lucille Nall Kennedy on July 22, 1950, and together they raised three daughters. A dairy farmer in Rickreall for 40 years, Cal was proud of his long-time residence in Polk County. He was also very proud his 43 years of tireless, dedicated service at the Rickreall Volunteer Fire Department. But he was most proud of his family: his loving wife, his daughters, his grandchildren and great-grandchildren. In 2010, Cal was preceded in death by Lucille, his beloved wife of 60 years. He is survived by his brother Roy Kennedy of Salem; daughters LaVelle Nott of Rickreall; Nancy Clack of Scio; and Sarah Kennedy of Salem; three grandchildren and four great-grandchildren. Cal was a quiet, gentle man with a wry sense of humor and a winning smile. He did not speak often or loudly, but when he spoke, everyone listened. Though he will be sorely missed, his legacy will live on in the lives of his family, his fire department, his community, and all who knew and loved him. Cal will be laid to rest privately next to his wife at Restlawn Memory Gardens. His life will be celebrated on Thursday, September 6, 2012 from 6:00 p.m. to 9:00 p.m. at Eola Hills Wine Cellars, 501 S Pacific Highway W, Rickreall, OR 97371. Please come prepared to share a meal and fond memories with Cal's family and community. In lieu of flowers, the family requests that donations be made to Cal's beloved Rickreall Fire Department, PO Box 53, Rickreall, OR 97371. Please share your memories and condolences at www.RestlawnFH.com.

RICKREALL - Calvin "Cal" Kennedy, 82, passed away peacefully in his home on August 22, 2012. He was born February 7, 1930 to Clinton and Jewel Kennedy in Chehalis, Washington, and lived most of his life in the Salem/Rickreall area. He married... View Obituary & Service Information

The family of Calvin D. "Cal" Kennedy created this Life Tributes page to make it easy to share your memories.