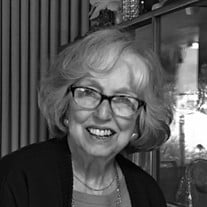 On Sunday, June 20, 2021, Beverly Hughes Vance, age 90, passed away and went to be with her Lord and Savior, Jesus Christ. Beverly was born May 27, 1931 in Britton, South Dakota to Louis and Lillian Shaff. In 1942, when Beverly was 11 years old, the family of six loaded all their furnishing into a 1932 Chevy and headed to Oregon. They settled in Salem with other family members who had come earlier searching for work. Beverly attended North Salem High School and Phagen’s Beauty School. She worked at Mabel’s Beauty Salon her entire career and in 1973, she bought the business from Mabel Schmitt. In 1947, Beverly met and fell in love with Hughie (Mann) Hughes and they were married in 1949. In 1953, Jodi was born and four and half years later, Jennifer arrived. The family enjoyed camping and spending time with extended family and friends. Bev and Hughie went on to travel the U.S. after their retirement. Beverly lost her Hughie in 1997, and soon met her neighbor, Allen Vance, who had also recently lost his wife of many years. They fell in love and married in 1999. Bev and Allen spent many years traveling the U.S. in their motor home. Bev was especially excited to travel to Europe where Allen had spent much of time while in the service. As the years went by, they enjoyed their home and garden. Beverly leaves behind her husband, Allen, two daughters, Jodi O’Neil (John), Jennifer Hughes Fjelland (Gary), stepson Gary Vance (Jean), seven grandchildren, five great grandchildren, and brother Don Shaff. A private graveside service with immediate family will be held. Charitable donations can be made to your local Hospice organization.

The family of Beverly J. Hughes Vance created this Life Tributes page to make it easy to share your memories.