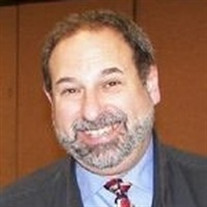 Barry Donenfeld passed away at his home in Salem, Oregon on September 18, 2010 at the age of 60. A memorial service and reception in Barry¡s honor will be held 4 p.m. Friday, September 24 at Creekside Golf Club, 6250 Clubhouse Drive SE, Salem Oregon 97306, officiated by the Reverend Robert-Bob McFalls, a long-time friend of Barry¡s and Chief Operating Officer of the National Association of Area Agencies on Aging (n4a) in Washington DC. Barry is survived by his brother Wayne Donenfeld of New Jersey, by loved-one and companion Margaret Davidson of Oregon and by his German shepherd Lola. Barry had many dear friends and colleagues in Salem, throughout Oregon, and across the United States who are mourning his passing. He was preceded in death by his parents. Born October 5, 1949, and raised in the Bronx, New York, Barry attended classes for intellectually gifted children in the NYC Public School system. He graduated from Bronx High School of Science, a specialized NYC high school, at the age of 16. Barry received a B.A. from Lehman College of the City University of New York and extensive post-graduate training in public health and epidemiology from the Center for Disease Control (CDC) in Atlanta, Georgia. As a child Barry and his family summered in the Catskill Mountains. He was also a day camp counselor there as a teenager and worked as a bellhop in the Catskills on weekends while in college. In later years he shared stories of the fun-filled memories from these occasions. Mr. Donenfeld¡s early work experience includes work at the Strang Cancer Clinic and the NYC Department of Health (fieldwork primarily related to stopping venereal disease transmission). At a young age Barry had decided that the lifestyle in the northeastern United States was not for him and in the mid-1970s he moved to Fresno, California. In 1976 he began work at the Fresno County Economic Opportunities Commission and later took a position at the Area VIII Board for Developmental Disabilities. Twenty years ago, in August of 1990, Barry accepted the position of Executive Director at Mid-Willamette Valley Senior Services Agency and relocated to Salem. During his tenure, MWVSSA became known as NorthWest Senior and Disability Services. Under Barry¡s leadership, the agency practically tripled in size, expanding its service area from three counties to five with a staff of approximately 256 employees. Until his final day, he worked tirelessly to ensure the highest possible quality of life for seniors and persons with disabilities, in a fiscally-responsible manner. Mr. Donenfeld was recognized as a ¡leader among leaders¡ by his national and state colleagues. Highlighting eight years of service to the organization, he served as the President of the National Association of Area Agencies on Aging (n4a) from 2000 C 2002. Mr. Donenfeld was the recipient of n4a's Excellence in Leadership Award at the Annual Conference this past July. He was recognized for his service at all levels of government. In addition to his national service, Mr. Donenfeld served as Chair of the Oregon Association of Area Agencies on Aging and Disability for two terms spanning eight years. From 1996 until 2004, Donenfeld served on the Oregon Governor¡s Task Force on Senior Services and was also appointed as the Governor¡s delegate to the 2005 White House Conference on Aging. Since childhood, Barry loved the Yankees Major League Baseball team and watched them play at the original Yankee Stadium less than a mile from his home. He had the joy of watching Mickey Mantle, Yogi Berra and other greats play. Barry was an avid golfer, especially in his younger days, and often took golf vacations with his brother and friends to the Northeast, Canada and Hawaii. Barry was a wine collector and connoisseur who enjoyed sharing his expertise with others and his wine collection as well, believing that wine was to be shared and enjoyed. He also enjoyed cooking and sharing those talents with his friends. He had active travel interests and beginning in his 20¡s he started traveling extensively making dozens of trips to Europe, particularly Italy, and in recent years frequent trips to the Hawaiian Islands. Barry often remarked that he felt most at home in those two locales C Italy and Hawaii. Surprising many people was the fact that Barry loved modern country music and enjoyed attending live concerts as often as possible. Barry had pet dogs and cats throughout his life and they were some of his most cherished companions. As such, memorials in Barry¡s honor can be made to the Willamette Valley Humane Society at 4246 Turner Road SE, Salem Oregon 97317 or www.willamettehumane.org.

Barry Donenfeld passed away at his home in Salem, Oregon on September 18, 2010 at the age of 60. A memorial service and reception in Barry¡s honor will be held 4 p.m. Friday, September 24 at Creekside Golf Club, 6250 Clubhouse Drive SE, Salem... View Obituary & Service Information

The family of Barry M. Donenfeld created this Life Tributes page to make it easy to share your memories.

Barry Donenfeld passed away at his home in Salem, Oregon on September...

Send flowers to the Donenfeld family.