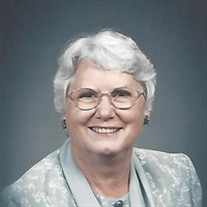 Barbara passed to her eternal rest on Sunday, March 31, in Bend, OR. She was 88 years young. Born in Salem, OR to Grove and Jennie (Bell) Peterson of Independence, she was the second of five siblings. She graduated from Independence High School in 1948 and went on to secretarial studies at Merritt Davis School of Business in Salem. She worked at the McKinney Lincoln Mercury car dealership in Salem where she met James Hilborn. They married on August 17, 1952 at the Monmouth First Christian Church and were just shy of 60 years when Jim passed on June 7, 2012.  They raised three children in Salem, Valsetz, and Dallas, OR. During those years, Barbara was mainly an excellent homemaker but also worked, at times, outside the home. She helped manage Jim's business of Valley Bookkeeping Service in Dallas and, in the early 70's, started working seasonally at Agripac in West Salem as a Lab tech, retiring after 20 years.  Barbara took great pride in the upkeep of her family's homes. She loved gardening and having her homes surrounded with beautiful flowers, shrubs, and trees. Cooking, canning, baking, and feeding her family and friends brought her great joy. Many extended family gatherings were held at the Hilborn's. Barbara loved kitties and had many over the years; the latest being "Maybe Girl" who was a great comfort for her. She was a woman of faith and loved her Lord and Savior, Jesus Christ. Barb involved herself in service with all the churches she attended, starting at Monmouth Christian as a child and young adult, then Court Street Christian in Salem, Valsetz Community Church, Dallas First Christian, and Salem First Church of the Nazarene. As a Sunday School teacher, Deaconess, committee member, visitor to shut-ins, or assisting with clothing give away events, she was always happy and willing to help however she could.  As her dementia progressed after Jim's death, her need for more care also increased. In September, 2016, she moved to Mt. Bachelor Memory Care in Bend. Although much of her memory and recognition of loved ones had failed her, she retained her sweet disposition, expressions, and beautiful smile. She was so loved and will be dearly missed.    Barbara is survived by her sister and brother in law, Beverly and Richard Mills, and her brother and sister in law, Leslie and Deanna Peterson, all of Albany, OR; her children, Sheryl Neff of Redmond, OR; Steven (Sandy) of Sherwood, OR; Laurel Brandt (Greg Harlacher) of Coos Bay, OR; grandchildren Amanda Renae Hilborn of Seoul, S. Korea: Kimberly Neff of Bend, OR; Nathan (Nina) Hilborn of Portland, OR; and great grandson Liam James Fountain of Bend. Also numerous cousins, nieces, and nephews.  She is preceded in death by her husband, James Wesley Hilborn; her parents, Grove and Jennie Peterson; sister and brother in law, Shirley and Ralph Wilson; brother and sister in law, John and June (Wilson) Peterson, numerous aunts, uncles, cousins, and a nephew, Duane Wilson.  The family suggests that donations in her memory be made to either Alzheimer's Association, Heart 'n Home Hospice and Palliative Care, or Willamette Humane Society and sent to Mt. Bachelor Memory Care, attn: Kimmie Neff @ 20225 Powers Road, Bend, OR 97702. Please also include on the envelope "Barbara Hilborn Memorial".  A memorial/celebration service for Barbara will be held on Thursday, April 11th at 2:00 p.m. at Restlawn Memory Gardens, 201 Oak Grove, Salem, OR.

Barbara passed to her eternal rest on Sunday, March 31, in Bend, OR. She was 88 years young. Born in Salem, OR to Grove and Jennie (Bell) Peterson of Independence, she was the second of five siblings. She graduated from Independence High School... View Obituary & Service Information

The family of Barbara Hilborn created this Life Tributes page to make it easy to share your memories.

Barbara passed to her eternal rest on Sunday, March 31, in Bend,...

Send flowers to the Hilborn family.