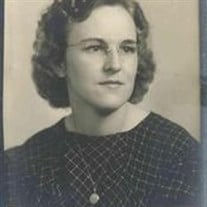 L. Alice Anderson December 24, 1919-December 10, 2011 Keizer- Alice, aged 91, went to sleep peacefully to meet her God at the Families in Transition home on December 10, after a fall in her home. Alice was born to Herbert Maurice Greene and Leon Alti (DeCamp) Greene on December 24, 1919 in Maupin, Oregon. She grew up, attended school and worked hard with her parents and nine siblings on their farm near the Deschutes River. After graduating high school, Alice moved to Klamath Falls to attend business school. She did well and was never without a job. She continued to work hard all her life. Alice met Otis in Klamath Falls and they were married April 6, 1943. Two sons were the result of that marriage, with Arnie being born in 1947 and Ron in 1955. After moving to Keizer in 1948, they owned and operated Keizer Cleaners, living on Verda Lane. In the early 1960's, the two of them looked into the future, deciding to build what was then known as a "trailer park." Their home overlooked Ferrill's Nursery on Chemawa Road. Thinking the area was the perfect location, they decided to ask the owner to sell it to them so they could build what later became Rainbow Gardens Mobile Village. They operated the park until 2010, at which time they turned the park operations over to their sons. The park remains in operation today, nearly 50 years after their look into the future. Alice loved to garden and grew beautiful Fuchsias, Dahlias, Christmas Cacti and many others. Her green thumb helped produce a beautiful landscaped yard for others to enjoy. Her time in the dry cleaning business as the seamstress gave her the skills to sew Pendleton wool shirts for Otis and her boys. She additionally crocheted and loved to collect dolls. Alice is survived by Otis, her husband of 68 years; 2 sons, Arnie and his wife Linda of Salem, Ron and wife Connie of Keizer; four grandchildren, four step-grandchildren, 10 step-great-grandchildren, 3 step-great-great-grandchildren and two sisters, Mae McCorkle of Maupin, Oregon and Elnora Cyrtzer of Tygh Valley, Oregon, as well as many nieces and nephews. Alice was preceded in death by grandson Paul, three brothers and four sisters. She was loved by all her family and many friends, and will be missed by all. Donations may be made to the Salem-Keizer Meals-on-Wheels program. A celebration of Alice's Life will at 1:00 p.m. on Friday, December 16th at Restlawn Funeral Home. Private interment will follow at Restlawn Memory Gardens.

L. Alice Anderson December 24, 1919-December 10, 2011 Keizer- Alice, aged 91, went to sleep peacefully to meet her God at the Families in Transition home on December 10, after a fall in her home. Alice was born to Herbert Maurice Greene and... View Obituary & Service Information

The family of Alice L. Anderson created this Life Tributes page to make it easy to share your memories.