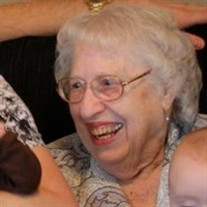 ADALINE EMMA TIMM May 30, 1927 – July 11, 2018 Just as she wanted, Mom passed away peacefully in her home with her loving family surrounding her. Adaline was 91 years old, born on May 30, 1927 in Staples Minnesota to Rohland and Jessie Martin. Her brother Douglas pre-deceased her in 2006.   She met our father, Harlan Timm in 1944 at a bus station café, where she worked, while he was serving in the US Army. They married on June 22,1947. In 1957 they moved to Corvallis, Oregon and later to Salem. She worked at the Oregon Department of Revenue for 13 years and retired in 1989. Adaline and Harlan were married fifty-nine years before Harlan passed away in 2006. They were both members of St John Lutheran church. She is survived by their four children Gayla (Torry) Wilson, Kathy (Jim) Beukelman, Alan (Heidi) Timm all of Salem and Randy (Teri) Timm of Independence, five grandchildren, Patrick (Janeen) Sehl Jr. of Wichita KS, James Beukelman of Battle Ground WA, Ryan Beukelman of Peoria IL, Leah Beukelman of Seattle WA, and Bob Mills of Ft Atkinson, WI, and three great-grandchildren Micah, Isaac and Malachi Sehl of Wichita KS. Also close family friend, Carol Graham of Salem. Adaline made friends everywhere she went. The bank, the post office and even the grocery store. She loved babies and even acquired a job while visiting in a store with a young mother who needed a babysitter. She cared for the baby until she was 5 years old. She was a very loving person and never had a bad word to say about anyone. She was an avid pinochle player and played at all of the senior centers whenever she could. She was known as a very savvy player and hard to beat. A private burial service was held on Monday July 16, 2018 at Restlawn Funeral Home in Salem. A memorial service will be held at St John Lutheran church on Thursday July 26, 2018 at 2 PM.

The family of Adaline E. Timm created this Life Tributes page to make it easy to share your memories.

Send flowers to the Timm family.